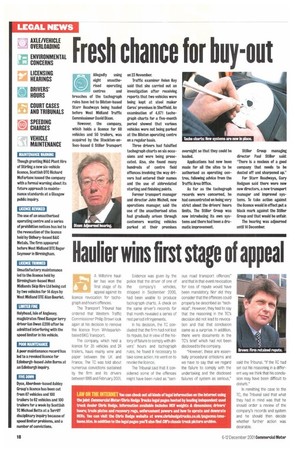 Page 18, 6th December 2001 — Haulier wins first stage of appeal
Close
Noticed an error?
If you've noticed an error in this article please click here to report it so we can fix it.
Keywords : Tachograph, Road Transport, Law / Crime

A Wiltshire haulier has won the '.'irst stage of its appeal against its

The Transport Tribunal has ordered that Western Traffic Commissioner Philip Brown look again at his decision to remove the licence from Whiteparishbased BKG Transport.

The company which held a licence for 35 vehicles and 24 trailers, hauls mainly wine and paper between the UK and France, The TC was told about numerous convictions sustained by the firm and its drivers between 1995 and February 2001. Evidence was given by the police that the driver of one of

the company's vehicles, stopped in September 2000, had been unable to produce tachograph charts. A check on the same driver's records for that month revealed a series of rest period infringements, In his decision, the TC concluded that the firm had not lost its repute, but in view of the history of failure to comply with drivers' hours and tachograph rules, he found it necessary to take some action. He went on to revoke the licence,

The Tribunal said that it considered some of the offences might have been ruled as "seri ous road transport offences" and that in that event revocation for loss of repute would have been mandatory. Nor did they consider that the offences could properly be described as "technical". However, they had to say that the reasoning In the IC's decision did not lead to revocation and that that conclusion came as a surprise. In addition, there were documents in the TC's brief which had not been disclosed to the company,

"However, these are essentially procedural criticisms and we have to say that we regard the failure to comply with the undertaking and the disclosed failures of system as serious," said the Tribunal. If the TC had set out his reasoning in a different way we think that his conclusion may have been difficult to disturb."

In remitting the case to the TC, the Tribunal said that what they had in mind was that he should order a review of the company's records and system and he should then decide whether further action was desirable.