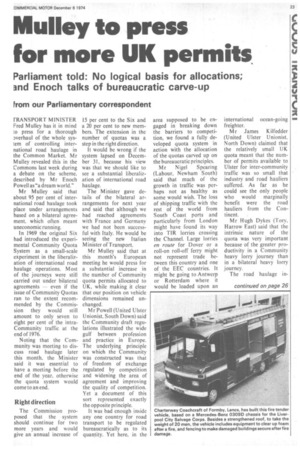 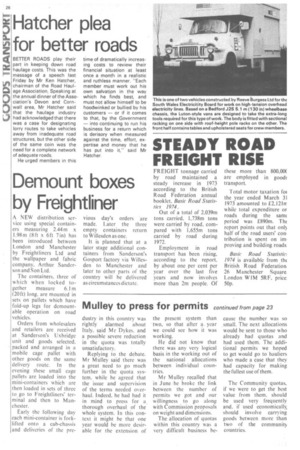 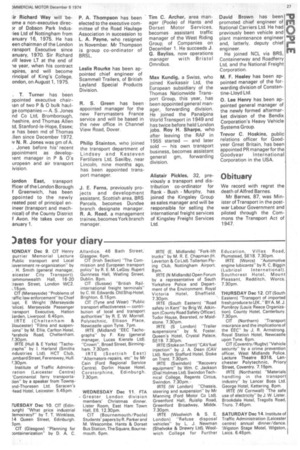 FRANSPORT MINISTER Fred Mulley has it in mind to press for a thorough Dverhaul of the whole system of controlling international road haulage in the Common Market. Mr Mulley revealed this in the Commons last week during a debate on the scheme, described by Mr Enoch Powell as "a dream world."

Mr Mulley said that about 95 per cent of international road haulage took place under arrangements based on a bilateral agreement, which often meant uneconomic running.

In 1969 the original Six had introduced the experimental Community Quota System as a small-scale experiment in the liberalization of international road haulage operations. Most of the journeys were still carried out under bilateral agreements — even if the issue of Community Quotas ran to the extent recommended by the Commission they would still amount to only seven to eight per cent of the intraCommunity traffic at the end of 1976.

Noting that the Cornmunity was meeting to discuss road haulage later this month, the Minister said it was essential to have a meeting before the end of the year, otherwise the quota system would come to an end.

The Commission proposed that the system should continue for two more years and would give an annual increase of 15 per cent to the Six and a 20 per cent to new members. The extension in the number of quotas was a step in the right direction.

It would be wrong if the system lapsed on December 31, because his view was that we should like to see a substantial liberalization of international road haulage.

The Minister gave details of the bilateral arrangements for next year and said that although we had reached agreements with France and Germany we had not been successful with Italy. He would be seeing the new Italian Minister of Transport.

Mr Mulley said that at this month's European meeting he would press for a substantial increase in the number of Community quota permits allocated to UK, while making it clear that our position on vehicle dimensions remained unchanged.

Mr Powell (United Ulster Unionist. South Down) said the Community draft regulations illustrated the wide gulf between profession and practice in Europe. The underlying principle on which the Community was constructed was that of freedom of exchange regulated by competition and widening the area of agreement and improving the quality of competition. Yet a document of this sort represented exactly the opposite principle.

It Was bad enough inside any one country for road transport to be regulated bureaucratically as to its quantity. Yet here, in the area supposed to be engaged in breaking down the barriers to competition, we found a fully developed quota system in action with the allocation of the quotas carved up on the bureaucratic principles.

Mr Nigel Spearing (Labour, Newham South) said that much of the growth in traffic was perhaps not as healthy as some would wish. The loss of shipping traffic with the rest of the world from South Coast ports and particularly from London might have found its way into T1R lorries crossing the Channel. Large lorries en route for Dover or a roll-on roll-off ferry might not represent trade between this country and one of the EEC countries. It might be going to Antwerp or Rotterdam where it would be loaded upon an international ocean-going freighter.

Mr James Kilfedder (United Ulster Unionist, North Down) claimed that the relatively small UK quota meant that the number of permits available to Ulster for inter-community traffic was so small that industry and road hauliers suffered. As far as he could see the only people who would marginally benefit were the road hauliers from the Continent.

The road haulage in dustry in this country was rightly alarmed about Italy, said Mr Dykes. and a possible severe reduction in the quota was totally unsatisfactory.

Replying to the debate, Mr Mulley said there was a great need to go much further in the quota system, while he agreed that the issue and supervision of the terms needed 0\ erhaul. Indeed, he had had it in mind to press for a, thorough overhaul of the whole system. In this context it might he that one year would be more desirable for the extension of the present system than two, so that after a. year we could see how it was working.

He did not know that there was any very logical basis in the working out of the national allocations between individual countries.

Mr Mulley recalled that in June he broke the link between the number of permits we got and our willingness to go along with Commission proposals on weight and dimensions.

cause the number was so small. The next allocations would be sent to those who already had quotas and had used them. The additional permits we hoped to get would go to hauliers who made a case that they had capacity for making the fullest use of them.

The Community quotas, if we were to get the best value from them, should be used very frequently and, if used economically, should involve carrying goods :between more than two of the community countries.

jr Richard Way will beome a non-executive direc)r of Dobson Park Indusles Ltd of Nottingham from anuary 16, 1975. He has een chairman of the London ransport Executive since anuary, 1970. Sir Richard /ill leave LT at the end of le year, when his contract xpires, and will become rincipal of King's College, ondon, on August 1, 1975.

■ r N. R. Jones was gm of A. . Jones before his' recent ppointment as developlent manager in P & O's uropean and air transport ivision.

iordon East, transport fficer of the London Borough f Greenwich, has been ppointed to the newly reated post of principal enineer (transport and mechnical) of the County District f Avon. He takes over on anuary 1. P. A. Thompson has been elected to the executive committee of the Road Haulage Association in succession to L. A. Payne, who resigned in November. Mr Thompson is group co-ordinator of BR SL.

R. S. Green has been appointed manager for the new Ferrymasters France service and will be based in the new office in Channel View Road, Dover.

Max Kundig, a Swiss, who joined Kwikasair Ltd, the European subsidiary of the Thomas Nationwide Transport Group, this year, has been appointed general manager, forwarding division. He joined the Panalpina World Transport in 1949 and has twice before held London jobs. Roy H. Sharpe, who after leaving the RAF in 1955 started — and later sold — his own transport business, becomes assistant general gm, forwarding division.

Alistair Pickles, 32, previously a transport and distribution co-ordinator for Rank Bush Murphy, has joined the Kingsley Group as sales manager and will be responsible for selling the international freight services of Kingsley Freight Services Ltd. David Brown has been promoted chief engineer of National Carriers Ltd. He had previously been vehicle and plant maintenance engineer and, latterly, deputy chief engineer.

He joined NCL via BRS, Containerway and Roadferry Ltd, and the National Freight Corporation.

M. F. Healey has been appointed manager of the forwarding division of Constantine-Lloyd Ltd.

Trevor C. Hoskins, public relations officer for Goodyear Great Britain, has been appointed PR manager for the Goodyear International Corporation in the USA.

We record with regret the death of Alfred Barnes.

Mr Barnes, 87, was Minister of Transport in the postwar Labour Government and piloted through the Commons the Transport Act of 1947.