IS LICENSING X34SING ITS TEETH? 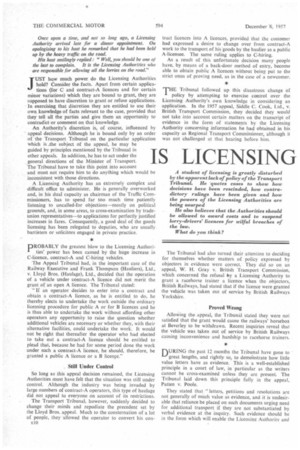 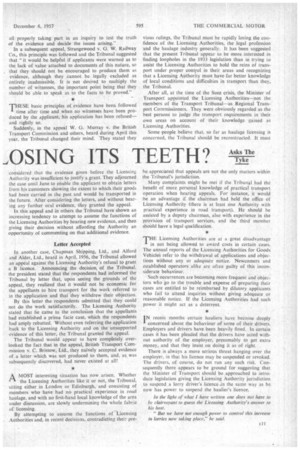 Page 54, 6th December 1957 — IS LICENSING X34SING ITS TEETH?
Close
Noticed an error?
If you've noticed an error in this article please click here to report it so we can fix it.

jrUST how much power do the Licensing Authorities hold? Consider the facts. Apart from certain applications (for C and contract-A licences and for certain minor variations) which they are bound to grant, they are supposed to have discretion to grant or refuse applications. In exercising that discretion they are entitled to use their own knowledge of facts relevant to the case, provided that they tell all the parties and give them an opportunity to contradict or comment on that knowledge.

An Authority's discretion is, of course, influenced by appeal decisions. Although he is bound only by an order of the Transport Tribunal on the particular application which is ..the subject of the appeal, he may be guided by principles mentioned by the Tribunal in other appeals. In addition, he has to act under the general directions of the Minister of Transport. The Tribunal have to take this point into account and must not require him to do anything which would be inconsistent with those directions.

A Licensing Authority has an extremely complex and difficult office to administer. He is generally overworked and, in his dual capacity as chairman of the Traffic Commissioners, has to spend far too much time patiently listening to uncalled-for objections—mostly on political grounds, and, in some areas, to cross-examination by tradeunion representatives—to applications for perfectly justified increases in fares. Consequently, a good deal of the goods licensing has been relegated to deputies, who are usually barristers or solicitors engaged in private practice.

pROBABLY the greatest blow to the Licensing Authorities' power has been caused by the huge increase in C-licence, contract-A and C-hiring vehicles.

The Appeal Tribunal had, in the important case of the Railway Executive and Frank Thompson (Hauliers), Ltd., v. Lloyd Bros. (Haulage), Ltd., decided that the operation of a vehicle under contract-A licence did not merit the grant of an open A licence. The Tribunal stated: "If an operator decides to enter into a contract and obtain a contract-A licence, as he is entitled to do, he thereby elects to undertake the work outside the ordinary licensing procedure for public A or for B licences and he is thus able to undertake the work without affording other operators any opportunity to raise the question whether additional vehicles are necessary or whether they, with their alternative facilities, could undertake the work. It would not be right that thereafter the operator who had elected to take out a contract-A licence should be entitled to plead that, because he had for some period done the work under such a contract-A licence, he should, therefore, he granted a public A licence or a B licence."

Still Under Control So long as this appeal decision remained, the Licensing Authorities must have felt that the situation was still under control. Although the industry was being invaded by large numbers of contract-A operators, this type of haulage did not appeal to everyone on account of its restrictions.

The Transport Tribunal, however, suddenly decided to change their minds and repudiate the precedent set by the Lloyd Bros. appeal. Much to the consternation of a lot of people, they allowed the operator to convert his con tract licences into A licences, provided that the customer had expressed a desire to change over from contract-A work to the transport of his goods by the haulier as a public A-licensee. The same ruling applies to C-hiring.

As a result of this unfortunate decision many people have, by means of a back-door method of entry, become able to obtain public A licences without being put to the strict onus of proving need, as in the case of a newcomer.

THE Tribunal followed up this disastrous change of

policy by attempting to exercise control over the Licensing Authority's own knowledge in considering an application. In the 1957 appeal, Siddle C. Cook, Ltd., v. British Transport Commission, they decided they would not take into account certain matters on the transcript of evidence in the form of statements by the Licensing Authority concerning information he had obtained in his capacity as Regional Transport Commissioner, although it was not challenged at that hearing before him.

The Tribunal had also turned their attention to deciding for themselves whether matters of policy expressed by objectors in evidence were correct. They did so on an appeal, W. H. Gray v. British Transport Commission, which concerned the refusal by a Licensing Authority to grant a racehorse trainer a licence when the objectors, British Railways, had stated that if the licence were granted the vehicle was taken out of service by British Railways Yorkshire.

Proved Wrong Allowing the appeal, the Tribunal stated they were not satisfied that the grant would cause the railways' horsebox at Beverley to be withdrawn. Recent inquiries reveal that the vehicle was taken out of service by British Railways causing inconvenience and hardship to racehorse trainers.

DURING the past 12 months the Tribunal have gone to

great lengths, and rightly so, to demobstrate how little value letters have as evidence. This is a well-established principle in a court of law, in particular as the writers cannot be cross-examined unless they arc present. The Tribunal laid down this principle fully in the appeal, Patten v. Poole.

They stated that "letters, petitions and resolutions are not generally of much value as evidence, and it is undesirable that reliance be placed on such documents urging need for additional transport if they are not substantiated by verbal evidence at the inquiry. Such evidence should be in the form which will enable the Licensing Authority and

all properly taking part in an inquiry to test the truth of the evidence and decide the issues arising."

In a subsequent appeal, Strangewood v. G. W. Railway Co., this principle was followed and the Tribunal suggested that "it would be helpful if applicants were warned as to the lack of value attached to documents of this nature, so that they should not be encouraged to produce them as evidence, all they Cannot be legally excluded as entirely inadmissible. It is not desired to multiply the number of witnesses, the important point being that they should be able to speak as to the facts to be proved."

THESE basic principles of evidence have beenfollowed 4 time after time and when no witnesses have been produced by the applicant, his application has been refused— and rightly so.

Suddenly, in the appeal W. G. Murray v. the British Transport Commission and others, heard during April this year, the Tribunal changed their mind. They stated they considered that the evidence given before the Licensing Authority was insufficient to justify a grant. They adjourned the case until June to enable the applicant to obtain letters from his customers showing the extent to which their goods had been carried in the past and would be transported in the future. After considering the letters, and without hearing any further oral evidence, they granted the appeal. In this appeal and in others the Tribunal have shown an increasing tendency to attempt to assume the functions of the Licensing Authorities by hearing new evidence, and then giving their decision without affording the Authority an opportunity of commenting on that additional evidence.

In another case, Chapman Shipping, Ltd., and Alford and Alder, Ltd., heard in April, 1956, the Tribunal allowed an appeal against the Licensing Authority's refusal to grant a B licence. Announcing the decision, of the Tribunal. the president stated that the respondents had informed the Tribunal by letter that, upon seeing the grounds of the appeal, they realized that it would not be economic for the appellants to hire transport for the work referred to in the application and that they withdrew their objection.

By this letter the respondents admitted that they could not do the work satisfactorily. The Licensing Authority stated that he came to the conclusion that the appellants had established a prima facie case, which the respondents had amply rebutted. Without even referring the application back to the Licensing Authority and on the unsupported evidence of this letter, the Tribunal granted the appeal.

The Tribunal would appear to have completely overlooked the fact that in the appeal, British Transport Commission v. C. Bristow, Ltd., they naively accepted evidence of a letter which was not produced to them, and. as was subsequently discovered, had never existed at all!

AMOST interesting situation has now arisen. Whether the Licensing Authorities like it or not, the Tribunal, sitting either in London or Edinburgh, and consisting of members who have had no practical experience in road haulage, and with no first-hand local knowledge of the area under discussion, are slowly undermining the whole fabric of licensing. By attempting to assume the functions of -Licensing Authorities and, in recent decisions, contradicting their pre

After all, at the time of the Suez crisis, the Minister of Transport appointed the Licensing Authorities—not the members of the Transport Tribunal—as Regional Transport Commissioners. They were obviously regarded as the best persons to judge the transport requirements in their own areas on account of their knowledge gained as Licensing Authorities.

Some ,people believe that, so far as haulage licensing is concerned, the Tribunal should be reconstructed. It must

be appreciated that appeals are not the only matters within the Tribunal's jurisdiction.

Many complaints might be met if the Tribunal had the benefit of more personal knowledge of practical transport operation when hearing appeals. For instance, it would . be an advantage if the chairman had held the office or Licensing Authority (there is at least one Authority with practical experience in road transport). He should be assisted by a deputy chairman, also with experience in the provision of transport services, and the third member should have a legal qualification.

THE Licensing Authorities are at a great disadvantage in not being allowed to award costs in certain cases. The annual reports of the Licensing Authorities for Goods Vehicles reier to the withdrawal of applications and objections without any or adequate notice. Newcomers and established operators alike are often guilty of this inconsiderate behaviour.

Such occurrences are becoming more frequent and objec, tors who go to the trouble and expense of preparing their cases are entitled to be reimbursed by dilatory applicants who fail to attend inquiries without giving adequate or reasonable notice. If the Licensing Authorities had such power it might act as a deterrent.

IN recent months certain hauliers have become deeply I concerned about the behaviour of some of their drivers. Employers and drivers have been heavily fined. In certain cases it has been pleaded that the drivers have acted without authority of the employer, presumably to get extra money, and that they insist on doing it as of right.

There is always a more serious threat hanging over the employer, in that his licence may be suspended or revoked. The drivers, of course, do not run any such risk. Consequently. there appears to be ground for suggesting that the Minister of Transport should be approached to introduce legislation giving the Licensing Authority jurisdiction to suspend a lorry driver's licence -in the same way as he now has power to suspend the haulier's licence.

In the light of what I have written one does not have to be clairvoyant to guess the Licensing Authority's answer to his host.

"But we have not enough power to control this increase in lorries now taking place," he said.