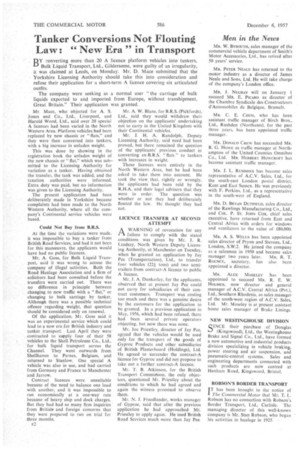 Page 46, 6th December 1957 — Men in the News
Close
Noticed an error?
If you've noticed an error in this article please click here to report it so we can fix it.
Keywords : Business / Finance

MR. PETER NEALE has returned to the motor industry as a director of James Neale and Sons, Ltd. He will take charge of the company's London office.

MR. J. L. RUMMINS has become sales representative of A.C.V. Sales. Ltd., for the south-east London postal district. Kent and East Sussex. He was previously with F. Perkins, Ltd., as a representative in the south-west of England.

MR. D. BRYAN DUTFIELD, sales director of the Rawlings Manufacturing Co., Ltd., and Cm. P. ST. JOHN COX, chief sales executive, have returned from East and Central Africa with orders for windows and ventilators to the value of £80,000.

MR. A. S. WELLS has been appointed sales director of Prynn and Stevens, Ltd., London, S.W.2. He joined the company as a salesman in 1950 and became sales manager two years later. Mn, R. T. ROUNCE, secretary, has also been appointed a director.

IT has been brought to the notice of The Commercial Motor that Mr. T. L. Robson has no connection with Robson's Border Transport, Ltd., Carlisle. The managing director of this well-known company is Mr. Stan Robson, who began his activities in haulage in 1925.