END OF THE AERODROMES ADVISORY BOARD. 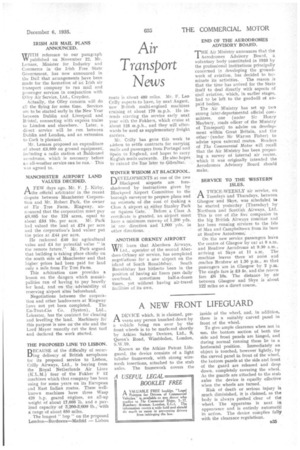 Page 49, 6th December 1935 — END OF THE AERODROMES ADVISORY BOARD.
Close
Noticed an error?
If you've noticed an error in this article please click here to report it so we can fix it.

THE Air Ministry announces that the Aerodromes Advisory Board, a voluntary body constituted in 1933 by the professional institutions principally concerned in developing the groundwork of aviation, has decided to ter

minate its activities. The reason is that the time has arrived for the State itself to deal directly with aspects of civil aviation, which, in earlier stages, had to be left to the goodwill of unpaid bodies.

The Air Ministry has set up two strong inter-departmental official committees, one (under Sir Henry Maybury, roads officer of the Ministry of Transport) to advise on development within Great Britain, and the other (under Sir Warren Fisher) to advise upon external routes. Readersof The Commercial Motor will recall that the Air Ministry has been preparing a survey of internal air routes, which it was originally intended the Aerodromes Advisory Board should make.