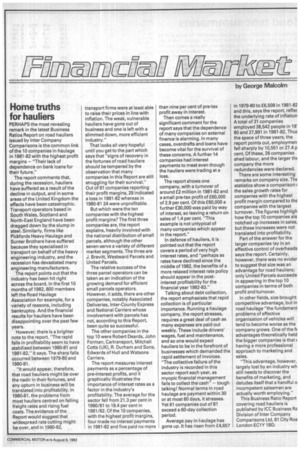 Page 65, 6th August 1983 — aguDczyczffm8 Mira( )2j by George Malcolm
Close
Noticed an error?
If you've noticed an error in this article please click here to report it so we can fix it.
Keywords : Rate Of Return, Salter Report, Business / Finance

PERHAPS the most revealing remark in the latest Business Ratios Report on road hauliers issued by Inter Company Comparisons is the common link of the 10 companies in haulage in 1981-82 with the highest profit margins — "Their lack of dependence on bank loans for their future."

The report comments that, during the recession, hauliers have suffered as a result of the decline in output, and in some areas of the United Kingdom the effects have been catastrophic. Transport operators based in South Wales, Scotland and North-East England have been dragged down by the slump in steel. Similarly, firms like Pickfords Heavy Haulage and Sunter Brothers have suffered because they specialised in transport on behalf of the heavy engineering industry, and the recession has devastated many engineering manufacturers.

The report points out that the industry has been hit right across the board. In the first 10 months of 1982, 800 members left the Road Haulage Association for example, for a variety of reasons, including bankruptcy. And the financial results for hauliers have been disappointing over the past few years.

"It would appear, therefore, that road hauliers might be over the nadir in their fortunes, and any upturn in business will be translated into profitability. In 1980-81, the problems from most hauliers centred on falling freight rates and rising fuel costs. The evidence of the Report would suggest that widespread rate cutting might be over, and in 1980-82, transport firms were at least able to raise their prices in line with inflation. The weak, vulnerable hauliers have gone out of business and one is left with a slimmed down, more efficient industry."

That looks all very hopeful until you get to the part which says that "signs of recovery in the fortunes of road hauliers should be tempered by the observation that many companies in this Report are still struggling for their survival." Out of 81 companies reporting their profit margins, 29 indicated a loss in 1981-82 whereas in 1980-81 24 were unprofitable.

But which were the ten companies with the highest profit margins? The first three companies are, the report explains, heavily involved with the national distribution of small parcels, although the other seven serve a variety of different market segments. The three are J. Brevitt, Westward Parcels and United Parcels.

The relative success of the three parcel operators can be taken as an indication of the growing demand for efficient small parcels operators. However, it adds, there are other companies, notably Associated Deliveries, Inter-County Express and National Carriers whose involvement with parcels has not, according to this Report, been quite so successful.

The other companies in the top 10 were Robert Deards, John Forman, Cartransport, Mitchell Cons (UK), R. Durham and Sons, Edwards of Hull and Watsons Carriers.

The report measures interest payments as a percentage of pre-interest profits, and it graphically illustrates the importance of interest rates as a factor in the industry's profitability. The average for the sector fell from 21.3 per cent in 1980/81 to 18.4 per cent in 1981/82. Of the 10 companies, with the highest profit margins, four made no interest payments in 1981-82 and five paid no more than nine per cent of pre-tax profit away in interest.

Then comes a really significant comment for the report says that the dependence of many companies on external finance is alarming. In many cases, overdrafts and loans have become vital for the survival of these concerns. A further 14 companies had interest payments to meet even though the hauliers were trading at a loss.

In defence of hauliers, it is pointed out that the report covers a period of very high interest rates, and "perhaps as rates have declined since the middle of 1982, the benefits of a more relaxed interest rate policy should appear in the postinterest profitability for the financial year 1982-83."

Talking about debt collection, the report emphasises that rapid collection is of particular importance. Running a haulage company, the report stresses, requires a great deal of cash as many expenses are paid out weekly. These include drivers' wages, fuel and maintenance, and so one would expect hauliers to be in the forefront of businesses which demanded the rapid settlement of invoices. "The collective failure of the industry is recorded in this sector report each year, as myopic financial management fails to collect the cash" — tough talking! Normal terms in road haulage are payment within 30 or at most 60 days, it stresses. Yet 61 companies out of 81 exceed a 60-day collection period.

There are some interesting remarks on company size. The statistics show a comparison the sales growth rates for companies with the highest profit margin compared to the companies with the largest turnover. The figures highligh how the top 10 companies als notched up increases in sales, but these increases were not translated into profitability.

Part of the answer for the larger companies lay in an effective control of overheads says the report. Certainly, however, there was no evider to suggest that size was an advantage for road hauliers; only United Parcels succeede in appearing in the top 10 companies in terms of both profit and turnover.

In other fields, size brought competitive advantage, but in road haulage "the fundament problems of effective organisation of vehicles will tend to become worse as the company grows. One of the ft advantages theoretically held the bigger companies is that c having a more professional approach to marketing and sales.

"This advantage, however, largely lost by an industry wh still needs to discover the benefits of marketing, and deludes itself that a handful o incompetent salesmen are actually worth employing."