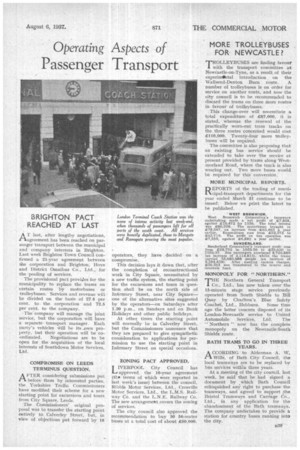 Page 45, 6th August 1937 — Operating Aspects of
Close
Noticed an error?
If you've noticed an error in this article please click here to report it so we can fix it.

AT last, after lengthy negotiations, agreement has been reached on passenger transport between the municipal and company interests in Brighton. Last week Brighton Town Council confirmed a 21-year agreement between the corporation and Brighton, Hove and District Omnibus Co., Ltd., for the pooling of services.

The provisional pact provides for the municipality to replace the trams on certain routes by motorbuses or trolleybuses. Services and revenue willbe divided on the basis of 27.5 per cent, to the corporation and 72.5 per cent. to the company.

The company will manage the joint service, hut the corporation will have a separate transport manager. Each party's vehicles will be its _own property, but their operation will be co ordinated. Negotiations are to be open for the acquisition of the local interests of Southdown Motor Services, Ltd.

AFTER considering submissions put before them by interested parties, the Yorkshire Traffic Commissioners have modified their scheme for a new starting point for excursions and tours from City Square, Leeds.

The Commissioners' original proposal was to transfer the starting point efirtirely to Calverley Street, but, in view of objections put forward by 18 operators, they have decided on a compromise.

This decision lays it down that, after the completion of reconstructional work in City Square, necessitated by a new traffic system, the starting point for the excursions and tours in question shall be on the north side of Infirmary Street, near City Square— one of the alternative sites suggested by the operators—on Saturdays after 1.30 p.m., on Sundays and on Bank Holidays and other public holidays.

At other times the starting point will normally be in Calverley Street, but the Commissioners announce that they are prepared to give sympathetic consideration to applications for permission to use the starting point in Infirmary Street on special occasions.

The city council also approved the recommendation to buy 30 56-seater buses at a total cost of about £50,000.