IT IS NOT EASY to think offhand of any other Ministerial team that would have got away with it. 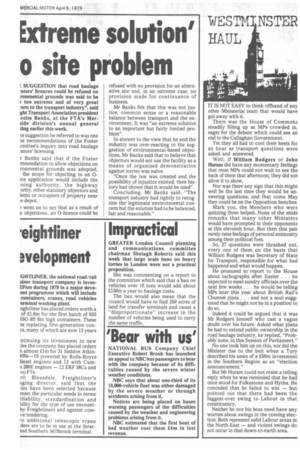 Page 7, 6th April 1979 — IT IS NOT EASY to think offhand of any other Ministerial team that would have got away with it.
Close
Noticed an error?
If you've noticed an error in this article please click here to report it so we can fix it.
Keywords : Transport, Land Transport, John Horam, Tachograph, Quiz, Parliament Of Singapore, Politics

There was the House of Commons steadily filling up as MPs crowded in, eager for the debate which could see an end to the Callaghan Government.

Yet they all had to cool their heels for an hour as transport questions were asked and answered.

Well, if William Rodgers or John Horam did have any momentary feelings that most MPs could not wait to see the back of them that afternoon, they did not allow it to show.

Nor was there any sign that this might well be the last time they would be answering questions, and that come May they could be on the Opposition benches.

Mark you, the Members who were quizzing them helped. None of the snide remarks that many other Ministers would have prompted in their opponents at this eleventh hour. But then this pair rarely raise feelings of personal animosity among their political foes.

So, 27 questions were thrashed out, every one of them on the basis that William Rodgers was Secretary of State for Transport, responsible for what had happened and what would happen.

He promised to report to the House about tachographs after Easter . . he expected to meet sundry officials over the next few weeks . . he would be telling MN later this year about British Rail's Chunnel plans. . . and not a soul suggested that he might not be in a position to do so.

Indeed it could be argued that it was Mr Rodgers himself who cast a vague doubt over his future. Asked what plans he had to extend public ownership in the road haulage industry, he replied, "Probably none, in this Session of Parliament."

No-one took him up on this, nor did the Minister rise to the bait when a Tory described his news of a £56m investment in the Southern Region as an "election announcement."

But Mr Horarn could not resist a telling reply when he was reminded that he had once stood for Folkestone and Hythe. He conceded that he failed to win — but pointed out that there had been the biggest-ever swing to Labour in that constituency.

Neither he nor his boss need have any worries about swings in the coming election. Both represent solid Labour areas in the North-East — and violent swings do not occur in that down-to-earth area.