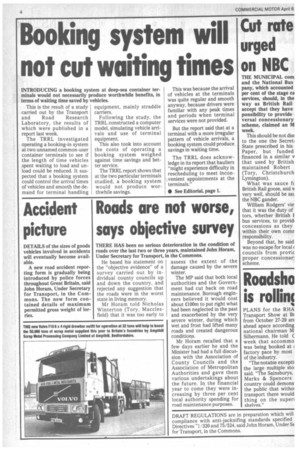 THERE HAS been no serious deterioration in the condition of roads over the last two or three years, maintained John Horam, Under Secretary for Transport, in the Commons.

He based his statement on the "objective evidence" of a survey carried out by individual county councils up and down the country, and rejected any suggestion that the roads were in the worst state in living memory.

Mr Horam told Nicholas Winterton (Tory, Macclesfield) that it was too early to assess the extent of the damage caused by the severe winter.

The MP said that both local authorities and the Government had cut back on road maintenance. Borough engineers believed it would cost about £100m to put right what had been neglected in the past and exacerbated by the very severe winter, during which wet and frost had lifted many roads and created dangerous conditions.

Mr Horam recalled that a few days earlier he and the Minister had had a full discussion with the Association of County Councils and the Association of Metropolitan Authorities and gave them various undertakings about the future. In the financial year to come they were increasing by three per cent local authority spending for road maintenance purposes.