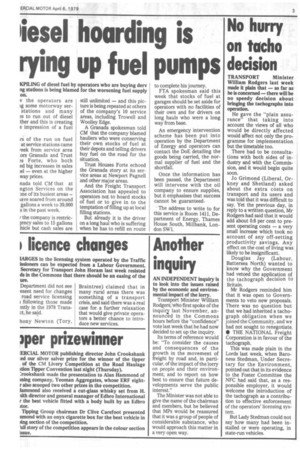 Page 5, 6th April 1979 — licence changes
Close
Noticed an error?
If you've noticed an error in this article please click here to report it so we can fix it.
Keywords : Local Government In England, John Horam, Braintree, Horam, Counties Of England, Politics Of The United Kingdom, Business / Finance, Politics

IARGES in the licensing system operated by the Traffic issioners can be expected from a Labour Government. Secretary for Transport John Horam last week resisted ds in the Commons that there should be an easing of the ure.

Department did not see esent need for changes road service licensing i following those made ?.ntly in the 1978 Transct, he said.

bony Newton (Tory, Braintree) claimed that in many rural areas there was something of a transport crisis, and said there was a real case for. a further relaxation that would give private operators a better chance to introduce new services.