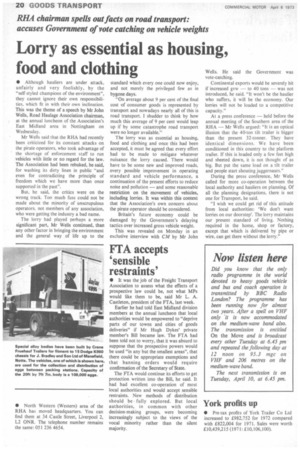 Page 22, 6th April 1973 — FTA accepts
Close
Noticed an error?
If you've noticed an error in this article please click here to report it so we can fix it.
Keywords :

• It was the job of the Freight Transport Association to assess what the effects of a prospective law could be, not what MPs would like them to be, said Mr L. A. Castleton, president of the FTA, last week.

Earlier he had told East Midland division members at the annual luncheon that local authorities would be empowered to "deprive parts of our towns and cities of goods deliveries" if Mr Hugh Dykes' private member's Bill became law. The FTA had been told not to worry, that it was absurd to suppose that the prospective powers would be used "in any but the smallest areas", that there could be appropriate exemptions and that banning orders would require confirmation of the Secretary of State.

The FTA would continue its efforts to get protection written into the Bill, he said. It had had excellent co-operation of most local authorities and would accept sensible restraints. New methods of distribution should be fully explored. But local authorities, in common with other decision-making groups, were becoming increasingly subject to the views of the vocal minority rather than the silent majority.