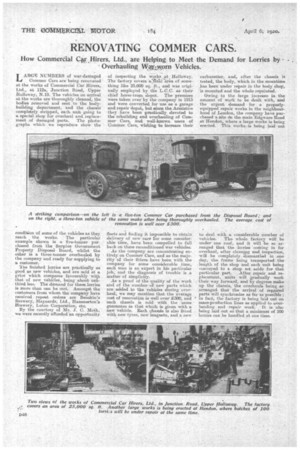 How Commercial Cwr ,Hirers, Ltd., are Helping to Meet the Demand for Lorries by Overhauling Way-worn Vehicles.

Commer Cars are being renovated at the works of Commercial Car Hirers, Ltd., at 112a, Junction Road, Upper ilolloway, N.19. The vehicles on arrival at the works are thoroughly cleaned; the bodies removed and sent to the bodybuilding department, and the chassis .completely stripped, each unit going to a special shop for overhaul and replacement of damaged parts. The photo-, graphs which we reproduce show the

condition of some of the vehicles as they reach the works. " The particular example shown is a fivetenner purchased from the Surplus Government Property Disposal Board, whilst the other is a three-tonner overhauled by the company and ready for supplying to a customer.

The finished lorries are practically as good is new vehicles, and are sold at a price which compa.res favourably wit.„11 that of new vehicles, being about onethird less. The demandfor these lorries is more than ean be met. Amongst the customers from whom the company have received repeat orders are Benskin's Brewery, Maynards, Ltd., Hammerton's Brewery, Luton Corporation etc.

By the courtesy of Mr. J. C. Moth, we were recently afforded 'an opportunity

of inspecting the werks ,at • Holloway. The factory covens 'a:teal...area of some-thing like 25,000 sq.'.ft., and was originally employed by the L.C.C. as their chief horse-trasu depot. The premises were taken over by the -company in 1913 and Were converted for use as a garage and repair depot, but sines the Armistice they have been praetically devoted to the rebuilding and overhauling of Commer Cars, and well-known users of Commer Cars, wishing to increase their

fleets and finding it impossible to obtain delivery of new cars for some considerable time, have been compelled to fall back on these reconditioned war vehicles.

As the company are concentrating entirely. on Commer Cars, and as the majority of their fitters have been with the company for some considerable time, each man is an expert in his particular job, and the diagnosis of trouble is a matter of simplicity.

As a proof of the quality of the work and of the number of new parts which are added to the vehicles during overhaul, we may mention that the average cost of renovation. is well over £300, and each chassis is sold with the -same guarantee as that which is given with a new vehicle. Each chassis is also fitted with new tyres, new magneto, and a new

carburetter, and, efter the chassis is tested, the body, which in the meantime has been under repair in the body shoP, 'is mounted and the whole repainted.

Owing to the large increase in the amount of work to be dealt with, and the urgent demand for a properlyequipped repair works in the neighbourhood of London, the company have purchased a site On the main Edgwarelload at Hendon, where a large works is being erected. This works,-is being laid out.

to deal with a, considerable number of

vehicles. The. whole factory willbe under one roof, and it will be so arranged that the lorries 'coming in for overhaul, after cleaning and inspection, will be completely dismantled in one day, the frame being transported the -length of the shop and. each unit being conveyed to a shop set aside for that particular part. After repair and replacement., units will gradually work their way forward, and by degrees make up the chassis, the overhauls being so arranged that the arrival of repaired parts will synchronize as fir as possible ;

• in fact, the factory is being laid out on mass-production lines as applied to everhauling and repair work. It is also being laid out so that a minimuni of 100 lorries can be handled at one time.