• Thomas Transport is surprisingly well placed to expand when 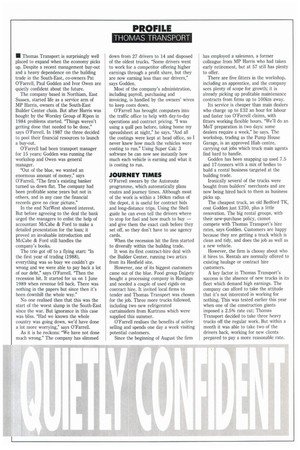 Page 39, 5th September 1991 — • Thomas Transport is surprisingly well placed to expand when
Close
Noticed an error?
If you've noticed an error in this article please click here to report it so we can fix it.
Keywords : Godden, Renting, Ford Motor Company, Transport, Business / Finance

the economy picks up. Despite a recent management buy-out and a heavy dependence on the building trade in the South-East, co-owners Pat O'Farrell, Paul Godden and Ivor Owen are quietly confident about the future.

The company based in Northiam, East Sussex, started life as a service arm of MP Harris, owners of the South-East Builder Center chain. But after Harris was bought by the Worsley Group of Ripon in 1984 problems started. "Things weren't getting done that needed to be done," says O'Farrell. In 1987 the three decided to pool their financial resources to launch a buy-out.

O'Farrell had been transport manager for 15 years; Godden was running the workshop and Owen was general manager.

"Out of the blue, we wanted an enormous amount of money," says O'Farrell. "The firm's existing banker turned us down flat. The company had been profitable some years but not in others, and in any case the financial records gave no clear picture."

In the end NatWest showed interest. But before agreeing to the deal the bank urged the managers to enlist the help of accountant McCabe & Ford to make a detailed presentation for the loan; it proved an invaluable introduction and McCabe & Ford still handles the company's books.

The trio got off to a flying start; "In the first year of trading (1988), everything was so busy we couldn't go wrong and we were able to pay back a lot of our debt," says O'Farrell. "Then the recession hit. It started for us on 1 June 1989 when revenue fell back. There was nothing in the papers but since then it's been downhill the whole way."

No one realised then that this was the start of the worst slump in the South-East since the war. But ignorance in this case was bliss. "Had we known the whole country was going down, we'd have done a lot more worrying," says O'Farrell.

As it is he reckons; "We have not done much wrong." The company has slimmed down from 27 drivers to 14 and disposed of the oldest trucks. "Some drivers went to work for a competitor offering higher earnings through a profit share, but they are now earning less than our drivers," says Godden.

Most of the company's administration, including payroll, purchasing and invoicing, is handled by the owners' wives to keep costs down.

O'Farrell has brought computers into the traffic office to help with day-to-day operations and contract pricing. "I was using a quill pen before, taking home my spreadsheet at night," he says. "And all the castings were kept at head office, so I never knew how much the vehicles were costing to run." Using Super Cak 3 software he can now see instantly how much each vehicle is earning and what it is costing to run_

O'Farrell swears by the Autoroute programme, which automatically plans routes and journey times. Although most of the work is within a 160km radius of the depot, it is useful for contract bids and long-distance trips. Using the Shell guide he can even tell the drivers where to stop for fuel and how much to buy — and give them the exact cash before they set off, so they don't have to use agency cards.

When the recession hit the firm started to diversify within the building trade.

It won its first contract-hire deal with the Builder Center, running two artics from its Henfield site.

However, one of its biggest customers came out of the blue. Food group Dalgety bought a processing company in Hastings and needed a couple of used rigids on contract hire. It invited local firms to tender and Thomas Transport was chosen for the job. Three more trucks followed, including two new refrigerated curtainsiders from Kurtrans which were supplied this summer.

O'Farrell realises the benefits of active selling and spends one day a week visiting potential customers.

Since the beginning of August the firm has employed a salesman, a former colleague from MP Harris who had taken early retirement, but at 57 still has plenty to offer.

There are five fitters in the workshop, including an apprentice, and the company sees plenty of scope for growth; it is already picking up profitable maintenance contracts from firms up to 100km away.

Its service is cheaper than main dealers who charge up to £32 an hour for labour and faster too O'Farrell claims, with fitters working flexible hours. "We'll do an MoT preparation in two days: some dealers require a week," he says. The workshop, trading as the Pump House Garage, is an approved Hiab centre, carrying out jobs which truck main agents find hard to handle.

Godden has been snapping up used 7.5 and 17-tonners with a mix of bodies to build a rental business targeted at the building trade.

Ironically several of the trucks were bought from builders' merchants and are now being hired back to them as business picks up.

The cheapest truck, an old Bedford TK, cost Godden just £250, plus a little renovation. The big rental groups, with their new-purchase policy, cannot compete with Thomas Transport's hire rates, says Godden. Customers are happy because they are getting a truck which is clean and tidy, and does the job as well as a new vehicle.

However, the firm is choosy about who it hires to. Rentals are normally offered to existing haulage or contract hire customers.

A key factor in Thomas Transport's success is the absence of new trucks in its fleet which demand high earnings. The company can afford to take the attitude that it's not interested in working for nothing. This was tested earlier this year when one of the construction giants imposed a 23% rate cut; Thomas Transport decided to take three heavy trucks off the regular work. But within a month it was able to take two of the drivers back, working for new clients prepared to pay a more reasonable rate.