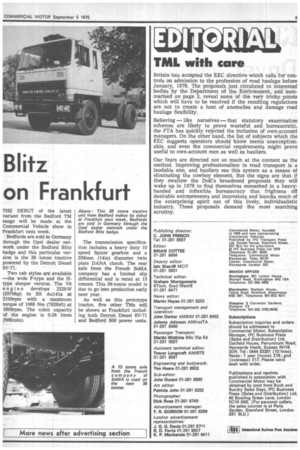 Page 7, 5th September 1975 — Blitz on Frankfurt
Close
Noticed an error?
If you've noticed an error in this article please click here to report it so we can fix it.

THE DEBUT of the latest variant from the Bedford TM range will be made at the Commercial Vehicle show in Frankfurt next week.

Bedfords are sold in Germany through the Opel dealer network under the Bedford Blitz badge and this particular version is the 38 tonne tractive powered by the Detroit Diesel 8V-71.

Two cab styles are available —the wide F-type and the Htype sleeper version. The V8 engine develops 222kW (297bhp) to BS Au141a at 2100rpm with a maximum torque of 1060 Nm (782lbft) at 1600rpm. The cubic capacity of the engine is 9.28 litres (566cuin). The transmission specification includes a heavy duty 10 speed Spicer gearbox and a 356mm (14in) diameter twin plate DANA clutch. The rear axle from the French SoMA company has a limited slip differential and is rated at 13 tonnes, This 38-tonne model is due to go into production early next year.

As well as this prototype tractor, five Other TMs will be shown at Frankfurt including both Detroit Diesel 6V-71 and Bedford 500 power units.