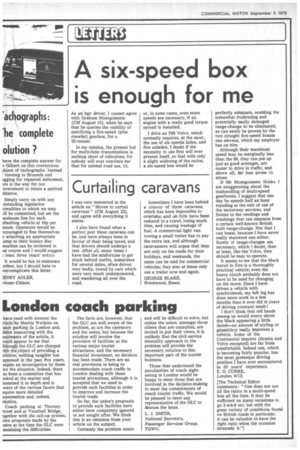 Page 42, 5th September 1975 — Curtailing caravans
Close
Noticed an error?
If you've noticed an error in this article please click here to report it so we can fix it.
Keywords : Driving, Towing, Trailer, Human Interest

I was very interested in the article on "Moves to curtail caravans" (CM August 22), and agree with everything it states.

I also have found what a perfect pest these caravans can be, and have always been in favour of their being taxed, and that drivers should undergo a test. After all, many times I have had the misfortune to get stuck behind outfits, sometimes for several miles, often driven very badly, towed by cars which were very much underpowered, and wandering all over the road. Sometimes I have been behind a convoy of three caravans, which has been impossible to overtake, and on hills have been reduced to a crawl, losing much time, and causing wastage of fuel. A commercial light van towing a small trailer has to pay the extra tax, and although caravanners will argue that they are only on the roads for their holidays, and weekends, the same can be said for commercial vehicles; they also at times only use a trailer now and again.