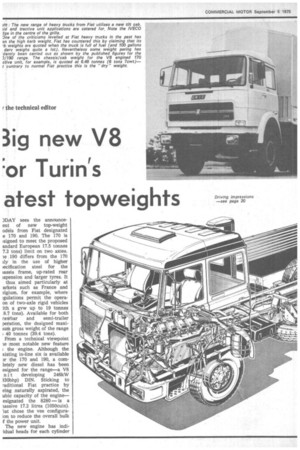 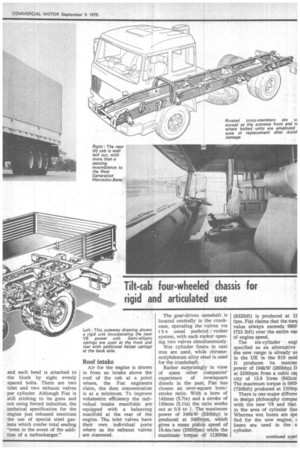 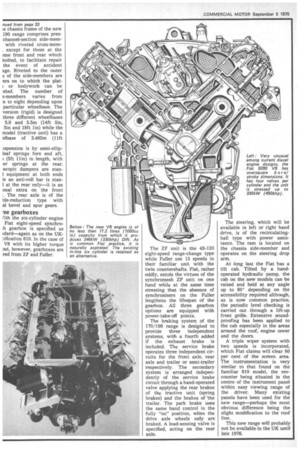 Page 34, 5th September 1975 — t the technical editor
Close
Noticed an error?
If you've noticed an error in this article please click here to report it so we can fix it.

)DAY sees the announceent of new top-weight odels from Fiat designated e 170 and 190. The 170 is :signed to meet the proposed andard European 17.5 tonnes 7.2 tons) limit on two axles, le 190 differs from the 170 ily in the use of higher Pecification steel for the Lassis frame, up-rated rear Lspension and (larger tyres. It thus aimed particularly at arkets such as France and ?lgium, for example, where !gulations permit the operaon of two-axle rigid vehicles ith a gvw up to 19 tonnes .8.7 tons). Available for both raWbar and semi-trailer peration, the designed maxiaim gross weight of the range ;40 tonnes (39.4 tons).

From a technical viewpoint le most notable new feature ; the engine. Although the Pasting in-line six is available pr the 170 and 190, a coinletely new diesel has been esigned for the range--a V8 nit developing 246kW 130bhp) DIN. Sticking to mditional Fiat practice by eing naturally aspirated, the ubic capacity of the engine-esignated the 8280 — is a lassive 17.2 litres (1050cuin). 'iat chose the vee configuraLon to reduce the overall bulk if the power unit.

The new engine has indiidual heads for each cylinder and each head is attached to the block by eight evenly spaced bolts. There are two inlet and two exhaust valves per cylinder. Although Fiat is still sticking to its guns and not using forced induction, the technical specification for the engine just released mentions the use of special steel gaskets which confer total sealing "even in the event of the addition of a turbocharger."

Air for the engine is drawn in from an intake above the roof of the cab at a point where, the Fiat engineers claim, the dust concentration is at a minimum. To improve volumetric efficiency the individual intake manifolds are equipped with a balancing manifold at the rear of the engine. The inlet valves have their own individual ports where as the exhaust valves are siamesed. The gear-driven aft is located centrally in the crankcase, operating the valves via the usual puslu/ rocker system, with each ker opening two valves sim taneously.

The six-cylinder engi specified as an alternative the new range is already us in the UK in the 619 mdd It produces its maximt power of 194kW (260bhp) D at 2200rpm from a cubic cal city of 13.8 litres (842cui The maximum torque is 990/, (7301bft) produced at 1200rp There is one major differer in design philosophy compat with the new V8 and that in the area of cylinder line Whereas wet liners are spe fled for the new engine, c liners are used in the s cylinder. Le chassis frame of the new 190 range comprises preschannel-section side-memwith riveted cross-mem, except for those at the me front and rear which bolted, to facilitate repair the event of accident age. Riveted to the outer s of the side-members are ers on to which the plat or bodywork can be rrted. The number of s-members varies from n to eight depending upon particular wheelbase. The version (rigid) is designed three different wheelbases 5.0 and 5.5m (14ft 5in, 5in and 18ft lin) while the model (tractive unit) has a &base of 3.485m (11ft xspension is by semi-ellipleaf springs fore and aft, (5ft Ilin) in length, with ,er springs at the rear. ,scopic dampers are stall! equipment at both ends le an anti-roil bar is stanI at the rear only—it is an onal extra on the front . The rear axle is of the ble-reduction type with al bevel and spur gears.

Tith the six-cylinder engine Fiat eight-speed synchroli gearbox is specified as Ldard—again as on the UKification 619. In the case of V8 with its higher torque )ut, however, gearboxes are red from ZF and Fuller. The ZF unit is the 4S-120 eight-speed range-change type while Fuller use 13 speeds in their familiar unit with the twin countershafts. Fiat, rather oddly, extols the virtues of the synchromesh ZF unit on one hand while at the same time stressing that the absence of synchronisers on the Fuller lengthens the lifespan of the gearbox. All three gearbox options are equipped with power-take-off points.

The braking system of the 170/190 range is designed to provide three independent systems, with a fourth added if the exhaust brake is included. The service brake operates three independent circuits for the front axle, rear axle and trailer or semi-trailer respectively. The secondary system is arranged independently of the service brake circuit through a hand-operated valve applying the rear brakes of the tractive unit (spring brakes) and the brakes of the trailer. The park brake uses the same hand control in the fully "on" position, when the drive axle wheels only are braked. A load-sensing valve is specified, acting on the rear axle. The steering, which will be available in left or right hand drive, is of the recirculatingball type with power assistance. The ram is located on the chassis side-member and operates on the steering drop arm.

At long last the Fiat has a tilt cab. Tilted by a handoperated hydraulic pump, the cab on the new models can be raised and held at any angle up to 60 depending on the accessibility required although, as is now common practice, the periodic level checking is carried out through a lift-up front grille. Extensive soundproofing has been applied to the cab especially in the areas around the roof, engine cover and the doors.

A triple wiper system with two speeds is incorporated, which Fiat claims will clear 80 per cent of the screen area. The instrumentation is very similar to that found on the familiar 619 model, the revcounter being situated in the centre of the instrument panel within easy viewing range of the driver. Many existing panels have been used for the new range—perhaps the most obvious difference being the slight modification to the roof line.

This new range will probably not be available in the UK until late 1976.