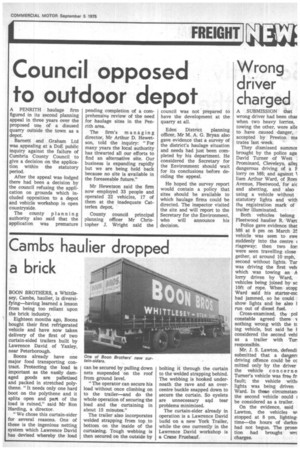 Page 23, 5th September 1975 — Council opposed to outdoor depot
Close
Noticed an error?
If you've noticed an error in this article please click here to report it so we can fix it.
Keywords : Catterlen

A PENRITH haulage firm figured in its second planning appeal in three years over the proposed use of a disused quarry outside the town as a depot.

Barnett and Graham Ltd was appealing at a DoE public inquiry against the failure of Cumbria County Council to give a decision on the application within the statutory period.

After the appeal was lodged there had been a decision by the council refusing the application on grounds which included opposition to a depot and vehicle workshop in open countryside.

The county planning authority also said that the application was premature pending completion of a comprehensive review of the need for haulage sites in the Penrith area.

The firm's managing director, Mr Arthur D. Hewetson, told the inquiry: "For many years the local authority has thwarted all our efforts to find an alternative site. Our business is expanding rapidly but we are being held back because no site is available in the foreseeable future."

Mr Hewetson said the firm now employed 33 people and operated 22 vehicles, 17 of them at the inadequate Catterlen depot.

County council principal planning officer Mr Christopher J. Wright said the council was not prepared to have the development at the quarry at all.

Eden District planning officer, Mr M. A. G. Bryan also gave evidence that a survey of the district's haulage situation and needs had just been completed by his department. He considered the Secretary for the Environment should wait for its conclusions before deciding the appeal.

He hoped the survey report would contain a policy that sites should be available to which haulage firms could be directed. The inspector visited the site and will report to the Secretary for the Environment, who will announce his decision.