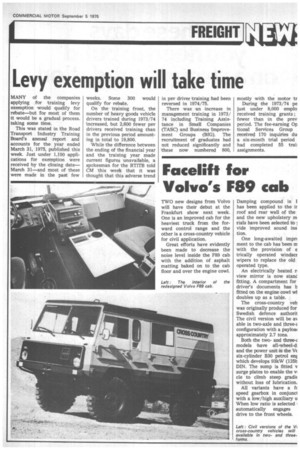 Page 21, 5th September 1975 — Levy exemption will take time
Close
Noticed an error?
If you've noticed an error in this article please click here to report it so we can fix it.
Keywords : Rebate, Sales Promotion, Business / Finance

MANY of the companies applying .for training levy exemption wotild qualify for rebate--but for most of 'them it would be a gradual process. taking some time.

This was stated in the Road Transport Industry Training Board's annual report and accounts for the year ended March 31, 1975, published this week. Just under 1,100 applications for exemption were received 'by the Closing date— March 31—and most of these were made In the pat few weeks. Some 300 would qualify for rebate.

On thetraining front, the number of heavy goods vehicle drivers trained during 1973/74 increased, but 2,600 fewer psv drivers received training than in the previous period amountmg in total to 19,800.

While the difference between the ending of the financial year and the training year made current figures 'unavailable, a spokesman for the RTITB told CM this week that it was thought that this adverse trend in pay driver Ltraining had been reversed in 1974/75.

There was an increase in management training in 1973/ 74 including Training Assistance in Small .Companies .(TA'SC) and 'Business 'Improvement Groups (BIG). The recruitment of graduates had not reduced significantly arid these now numbered 800, mostly with the motor tr During the 1973/74 pe just under 8,000 .emplo received training grants ; fewer than in the prev period. The fee-earning Op tonal Services Group received 170 inquiries du a six-month trial period had completed 55 trail assignments.