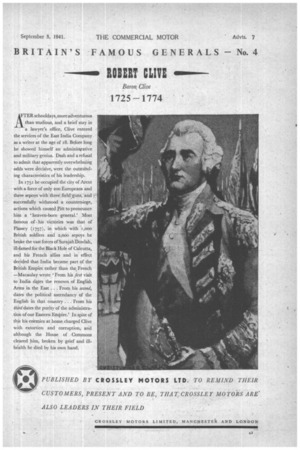 ER schooldays, more adventurous than studious, and a brief stay in

a lawyer's office, Clive entered the services of the East India Company as a. writer at the age of 18. Before long he showed himself an administrative and military genius. Dash and a refusal to admit that apparently overwhelming odds were decisive, were the outstanding characteristics of his leadership, In 1751 he occupied the city of Arcot with a force of only 200 Europeans and three sepoys with three field guns, and successfully withstood a countersiege, actions which caused Pitt to pronounce him a 'heaven-born general.' Most famous of his victories was that of Pla.ssey (1757), in which with 1,0oo British soldiers and 2,000 sepoys he broke the vast forces of S.urajahDowlah, ill-famed for the Black Hole of Calcutta, and his French allies and in effect decided that India became part of the British Empire rather than the French —Macaulay wrote 'From his first visit to India dates the renown of English Arms in the East . . . From his second, dates the political ascendancy of the English in that country. . . From his third dates the purity of the administration of our Eastern Empire.' In spite of this his enemies at home charged Clive with extortion and corruption, and although the House of Commons cleared him, broken by grief and illhealth he died by his own hand.