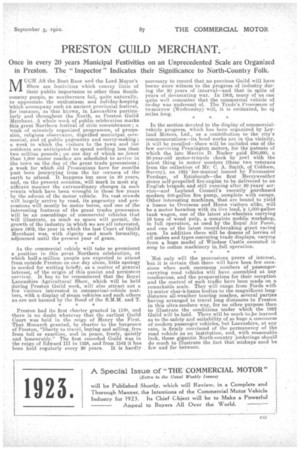 Once in every 20 years Municipal Festivities on an Unprecedented Scale are Organized in Preston. The " Inspector " Indicates their Significance to North-Countiy Folk.

MUCH AS the Boat Race and the Lord Mayor's Show are festivities which convey little of their, public importance to other than Southcountry people, so southerners fail, quite naturally, to appreciate the enthusiasm and holiday-keeping 'which accompany such an ancient provincial festival, for instance, as that known, in Lancashire particularly and throughout the North, as Preston Guild Merchant. A whole week of public celebration marks this great Northern festival of civic remembrance; a week of minutely organized programme, of prOcession, religious observance, dignified municipal ceremonial, and. of public pageantry and merry-making ; a week in which the visitors to the town and the residents are anticipated to spend nothing less than two million pounds; on one day of which no fewer than 1,000 motor coaches are scheduled to arrive in he town on the day of the great trade processions •,' ft week for which old Prestonians have for months past been journeying from the far corners of theearth to attend. It happens but once in 20 years; and, on the present oceasion, will mark in most sig nificarit manner the extraordinary changes in such events which have been wrought in those few years by the advent of the motor vehicle. Its vast crowds will largely arrive by road, its pageantry and processions will mostly be motor borne, and one of the interesting featureS of the great trades procession will be an assemblage of commercial Vehicles that will illustrate, as much as space will permit, the growth of the industry in which we are all interested, since 1902, the year in which the last Court of Guild Merchant. was with dignity and much formality, adjourned until the present year of grace.

As the commercial vehicle will take so prominent a position in this great Northern celebratipn, at which half-a-million people are expected to attend from outside Preston on one day alone, little apology is needed for writing briefly, as a matter of general interest, of the origin of this quaint and persistent survival. It has to be remembered that the Royal Lancashire Agricultural Show, which will be held during Preston Guild week, will also attract not a few visitors interested in commerical-ve.hicle matters, with a display of steam vehicles and such others as are not banned by the Bond of the S.M.M. and T.

Preston had its first charter granted in 1100, and

• there is no doubt whatever that the earliest Guild Court was held in the reign of Henry the First. That Monarch granted, by charter to the burgesses of Preston, "liberty to travel, buying and selling, free from toll or exaction, and in peace, freely, quietly and honourably." The first recorded Guild was in the reign of Edward III in 1328, and from 1542 it has been held regularly every 20 years. It is hardly necessary to record that no previous Guild will have borne more witness to the progress of industry during the 20 years of interval—and that in spite of years of devastating war. In 1902, many of us can quite well remember that the commercial vehicle of to-day was undreamt of. The Trade's Procession of to-morrow (Wedneeday) will, it is estimated, be 4i miles long.

In the section devoted to the display of commercialvehicle progress which has been organized by Leyland Motors, Ltd., as a contribution to the city's commemorations—its head works are in the vicinity, it will be recalled—there will be included one of the few surviving Pennington motors for the patents of which the late Martin D. Rucker paid 280,000, a 20-year-old motor-tricycle cheek by jowl with the latest thing in motor scooters (these two veterans from the collection of Mr, C. A. Smith, of Cobham, Surrey), an 1824 are-manual loaned by Firemaster Pordage, of Edinburgh—the first Merryweather steam self-propelledfire-engine to be delivered to an English brigade and still running after 20 years' service—and Leyland Council's recently ,purchased modern 500-gallon fire pump, complete with escape. Other interesting machines, that are bound to yield a lesson to Overseas and Home visitors alike, will 'be a motor horsebox with its live load, *a 1,000-gallon tank wagon, one of the latest six-wheelers carrying 10 tons of wood pulp, a complete mobile workshop, in full operation, as used by the Royal Air Force, and one of the latest record-breaking giant racing cars. In addition there will be dozens ef lorries of all makes and types conveying trade displays, varying from a huge model of Windsor Castle executed in soap to cotton machinery in full operation.

Not only will the processions prove of interest, but it is certain that there will have been few occasions when . such enormous numbers of passengercarrying road vehicles will have assembled at any rendezvous, and the preparations for their reception and the control of such traffic have been made on a remarkable scale. They will range from Fords with 14-seater char-h-bancs bodies to the magnificent longdistance all-weather touring coaches, several parties having arranged to travel long distances to Preston in this ultra-modern 'way, for no other purpose than to illustrate the conditions under which the 1922 Guild will be held. There will be much toioe learned as to the safety and suitability of so huge a concourse of modern passenger vehicles, but Lancashire, at any rate, is firmly convinced of the permanency of the road vehicle as an institution, and,. with reasonable luck, these gigantic North-country iunketings should do much to illustrate the fact that mishaps need be few and far between.