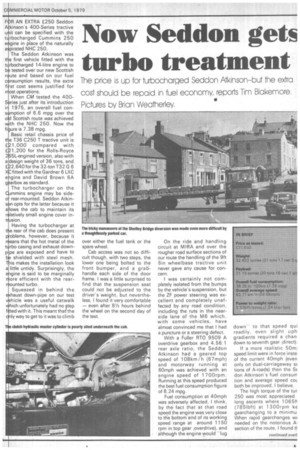 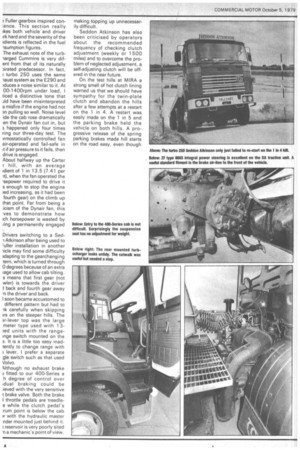 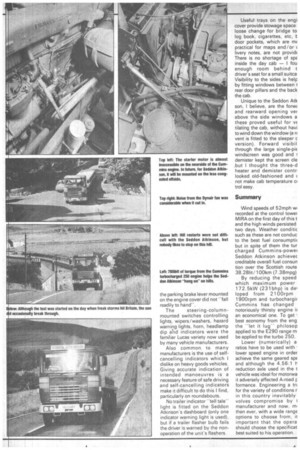 cost should be repaid in fuel economy, report Tim Blakemore.

u it can be specified with the I rbocharged Cummins 250

e gine in place of the naturally a pirated NHC 250.

The Seddon Atkinson was t e first vehicle fitted with the t rbocharged 14-litre engine to b tested over our new Scottish r ute and based on our fuel ci nsurnption results, the extra fi st cost seems justified for ost operations.

When CM tested the 400S ries just after its introduction 1975, an overall fuel con

The turbocharger on the mmins engine may be side o rear-mounted. Seddon Atkin s n opts for the latter because it a lows the cab to maintain its r latively small engine cover in t sion,

Having the turbocharger at t e rear of the cab does present oblems, however, because it eans that the hot metal of the t rbo casing and exhaust downp pe are exposed and have to shielded with steel mesh. is makes the installation look a little untidy. Surprisingly, the gine is said to be marginally ore efficient with the rearounted turbo.

Squeezed in behind the haust down-pipe on our test hide was a useful catwalk hich unfortunately had no t'ep f ted with it. This meant thatthe ly way to get to it was to climb over either the fuel tank or the spare wheel.

Cab access was not so difficult though, with two steps, the lower one being bolted to the front bumper, and a grabhandle each side of the door frame. I was a little surprised to find that the suspension seat could not be adjusted to the driver's weight, but nevertheless, I found it very comfortable — even after 81/2 hours behind the wheel on the second day of the test.

On the ride and handling circuit at IVIiRA and over the rougher road surface sections of our route the handling of the 9ft 6in wheelbase tractive unit never gave any cause for concern.

I was certainly not completely isolated from the bumps by the vehicle's suspension, but the ZF power steering was excellent and completely unaffected by any road condition, including the ruts in the nearside lane of the M6 which, with some vehicles, have almost convinced me that I had a puncture or a steering defect.

With a Fuller RTO 9509 A overdrive gearbox and 4.56:1 rear axle ratio, the Seddon Atkinson had a geared top speed of 108km / h (67mph) and motorway running at 60mph was achieved with an engine speed of 1700rpm. Running at this speed produced the best fuel consumption figure of 8.24 mpg.

Fuel consumption at 40mph was adversely affected, I think, by the fact that at that road speed the engine was very close to tlie bottom end of its working speed range at around 11 50 rpm in top gear ,,overdrive), and although the engine would -lug

down' to that speed qui readily, even slight uph gradients required a chan down to seventh gear ,direct).

tions of A-roads) then the SE don Atkinson's fuel consun

tion and average speed cot both be improved, I believe.

The high torque of the tur 250 was most appreciated long ascents where 1065N (785Ibft) at 1 30Orprn ke gearchanging to a minimu When rapid gearchanges needed on the notorious Ai section of the route, I found ti Fuller gearbox inspired conence. This section really Ikes both vehicle and driver irk hard and the severity of the 3dients is reflected in the fuel isumption figures.

The exhaust note of the turb-iarged Cummins is very difent from that of its naturally )irated predecessor. In fact, turbo 250 uses the same -must system as the E290 and Kluces a noise similar to it. At 00-1400rpm under load, I ticed a distinctive tone that .11d have been misinterpreted a misfire if the engine had not an pulling so well. Noise level ide the cab rose dramatically en the Dynair fan cut in, but

happened only four times ring our three-day test. The irmostatically controlled fan air-operated and fail-safe in it if air pressure to it fails, then drive is engaged.

About halfway up the Carter

r hill, with an average 'client of 1 in 13.5 (7_41 per it), when the fan operated the -sepower required to drive it s enough to stop the engine ied increasing, as it had been fourth gear) on the climb up that point. Far from being a icism of the Dynair fan, this .ves to demonstrate how ich horsepower is wasted by iing a permanently engaged Drivers switching to a Sed-I Atkinson after being used to 'uller installation in another iicle may find some difficulty idapting to the gearchanging tern, which is turned through 0 degrees because of an extra :age used to allow cab tilting. s means that first gear (not wler) is towards the driver I back and fourth gear away -n the driver and back.

I soon became accustomed to different pattern but had to ik carefully when skipping irs on the steeper hills. The ar-lever top Was the large meter type used with 13aed units with the rangeInge switch mounted on the a. It is a little too easy inadtently to change range with 3 lever. I prefer a separate gle switch such as that used Volvo.

klthough no exhaust brake 3 fitted to our 400-Series a h degree of control over 'dual braking could be lieved with the very sensitive t, brake valve. Both the brake I throttle pedals are treadlee while the clutch pedal's :rum point is below the cab ir with the hydraulic master nder mounted just behind it. reservoir is very poorly sited Tla mechanic's point of view, making topping up unnecessarily difficult, Seddon Atkinson has also been criticised by operators about the recommended frequency of checking clutch adjustment (weekly or 1500 miles) and to overcome the problem of neglected adjustment, a self-adjusting clutch will be offered in the near future.

On the test hills at fV1IRA a strong smell of hot clutch lining warned us that we should have sympathy for the twin-plate clutch and abandon the hills after a few attempts at a restart on the 1 in 4. A restart was easily made on the 1 in 5 and the parking brake held the vehicle on both hills. A progressive release of the spring parking brakes made hill starts on the road easy, even though the parking brake lever mounted on the engine cover did not "fall readily to hand".

Also common to many manufacturers is the use of selfcancelling indicators which I dislike on heavy goods vehicles. Giving accurate indication of intended manoeuvres is a necessary feature of safe driving and self-cancelling indicators make it difficult to do this I find, particularly on roundabouts.

No trailer indicator "tell tale" light is fitted on the Seddon Atkinson's dashboard (only one indicator warning light is used), but if a trailer flasher bulb fails the driver is warned by the nonoperation of the unit's flashers.

Useful trays on the engi cover provide stowage space loose change for bridge to log book, cigarettes, etc, door pockets, which are me practical for maps and/or livery notes, are not provich There is no shortage of spEinside the day cab — I fou enough room behind t driver's seat for a small suitca Visibility to the sides is help by fitting windows between I rear door pillars and the back the cab.

Unique to the Seddon Atk son, I believe, are the forwE and rearward opening ver above the side windows a these proved useful for VE tilating the cab, without havi to wind down the window (a rc vent is fitted to the sleeper c version). Forward visibil through the large single-pie windscreen was good and 1 demister kept the screen cle .but I thought the three-d heater and demister contr looked old-fashioned and ( not make cab temperature c■ trol easy.

Wind speeds of 52mph wi recorded at the control tower MIRA on the first day of this t and the high winds persisted two days. Weather conditic such as these are not conduc to the best fuel consumptic but in spite of them the tur charged Cummins-powei Seddon Atkinson achievec creditable overall fuel consun tion over the Scottish route 38.28Iit/ 100km (7.38mpg)

By reducing the speed which maximum power 172.5kW (231bhp) is de, loped from 2100rpm 1900rpm and turbochargir Cummins has changed notoriously thirsty engine ii an economical one. To get • best economy from the eng the "let it lug" philosop applied to the E290 range m be applied to the turbo 250.

Lower (numerically) a ratios have to be used with lower speed engine in order achieve the same geared spE and although the 4.561 h reduction axle used in the t vehicle was ideal for motorwa it adversely affected A-road p formance. Engineering a trt for the variety of conditions r in this country inevitably valves compromise by manufacturer and now, rm than ever, with a wide range options to choose from, it important that the opera should choose the specificat best suited to his operation.