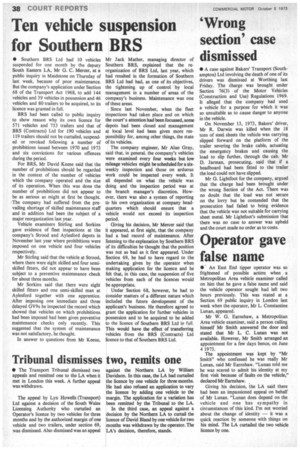 • The Transport Tribunal dismissed two appeals and remitted one to the LA when it met in London this week. A further appeal was withdrawn.

The appeal by Lyn Howells (Transport) Ltd against a decision of the South Wales Licensing Authority who curtailed an Operator's licence by two vehicles for three months and by the authorized margin of one vehicle and two trailers, under section 69, was dismissed. Also dismissed was an appeal

In the third case, an appeal against a decision by the Northern LA to curtail the licence of David Bland by one vehicle for two months was withdrawn by the operator. The LA's decision, therefore, stands.