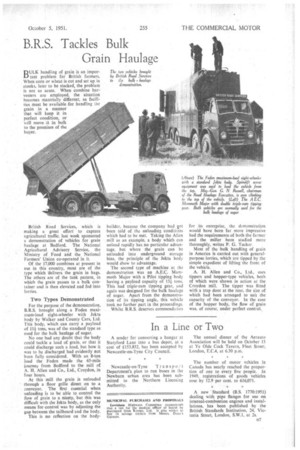 Page 47, 5th October 1951 — B.R.S. Tackles Bulk Grain Haulage
Close
Noticed an error?
If you've noticed an error in this article please click here to report it so we can fix it.

BULK handling of grain is an important problem for British farmers. When corn or wheat is cut and set up in stooks, later to be stacked, the problem is not so acute. When combine harvesters are employed, the situation becomes materially different, as facilities must be available for handling the grain in a manner that will keep it in perfect condition, or will move it in bulk to the premises of the buyer.

British Road Services, which is making a great effort to capture agricultural traffic, last week sponsored a demonstration of vehicles for grain haulage at Bedford. The National Agricultural Advisory Service, the Ministry of Food and the National Farmers' Union co-operated in it.

Of the 17,000 combines at present in use in this country, most are of the type which ;delivers the grain in bags. The others are of the tank pattern, in which the grain passes to a bulk container and is then elevated and fed into lorries.

For the purpose of the demonstration, B.R.S. brought along a Foden maximum-load eight-wheeler with Jekta body by Walker and County Cars, Ltd. This body, which can carry a payload of 1l tons, was of the standard type as used for the bulk haulage of sugar.

No one had any doubt that the body could tackle a load of grain, or that it could discharge such a load, but how it was to be discharged had evidently not been fully considered. With an 8-ton load the Foden made the 65-mile journey from Bedford to the mill of A. H. Allen and Co., Ltd., Croydon, in four hours.

At this mill the grain is unloaded through a floor grille direct on to •a conveyor. The first essential when unloading is to be able to control the flow of grain to a nicety, but this was difficult with the Jekta body, as the only means for control was by adjusting the gap between the tailboard and the body.

This is no reflection on the body

builder, because the company had r■t -been told of. the unloading conditions which had to be met. Taking the Allen mill as an example, a body which can unload rapidly has no particular advantage, but where the grain can be unloaded into underground storage bins, the principle of the Jekta body would show to advantage.

The second type of machine at the demonstration was an A.E,C. Mammoth Major with a Pilot tipping body having a payload capacity of 13i tons. This had triple-ram tipping gear, and again was designed for the bulk haulage of sugar. Apart from the demonstration of its tipping angle, this vehicle took no further part in the proceedings.

Whilst B.R.S. deserves commendation for its enterprise, the demonstration would have been far more impressive had the requirements of both the farmer and the miller been studied more thoroughly, writes P. G. Tucker.

Most of the bulk handling of grain in America is carried out with generalpurpose lorries, which arc tipped by the simple expedient of lifting the front of the vehicle, A. H. Allen and Co., Ltd., uses tippers and hopper-type vehicles, both of which were shown, in action at the Croydon mill. The tipper was fitted with a trap door at the rear, the size of which had been arranged to suit the capacity of the conveyor. In the case of the hopper body, the flow of grain was, of course, under perfect control.,