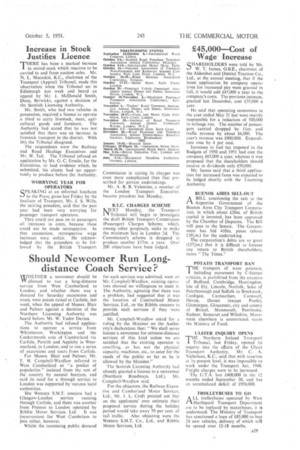 Page 31, 5th October 1951 — Increase in Stock Justifies Licence
Close
Noticed an error?
If you've noticed an error in this article please click here to report it so we can fix it.
Keywords : Tribunal, Business / Finance, Law / Crime

THERE has been a marked increase 1 in stored stock which requires to be carried to and from auction sales. Mr. N. L. Macaskie, K.C., chairman of the Transport (Appeal) Tribunal, made this observation when the Tribunal sat in Edinburgh last week and heard an appeal by Mr. J. McDonald Smith, Duns, Berwieks, against a decision of the Scottish Licensing Authority.

Mr. Smith, who had two vehicles in possession, required a licence to operate a third to carry livestock, meat, agricultural goods and furniture. The Authority had stated that he was not satisfied that there was an increase in livestock transport in the district. With this the Tribunal disagreed.

The respondents were the Railway and Road Haulage Executives and Mr. W. Tait. The Tribunal refused an application by Mr. G. C. Emslie, for the Executives, to lead evidence which, he submitted, his clients had no opportunity to produce before the Authority.