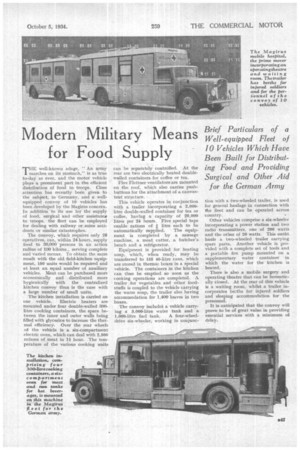 Page 65, 5th October 1934 — Modern Military Means for Food Supply
Close
Noticed an error?
If you've noticed an error in this article please click here to report it so we can fix it.

for the German Army

TlIE well-known adage, " An army marches on its stomach," is as true to-day as ever, and the motor vehicle plays a prominent part in the efficient distribution of food to troops. Close attention has recently been given to the subject, in Germany, and a wellequipped convoy of 10 vehicles has been developed by the Magirus concern. In addition to its use for the supply of food, surgical and other assistance to troops, the fleet can be employed for dealing with railway or mine accidents or similar catastrophes.

The convoy, which requires only 28 operatives, can, within 24 hours, supply food to 30,000 persons in an action radius of 100 kiloms., serving complete and varied menus. To obtain the same result with the old field-kitchen equipment, 154) units would be required and at least an equal number of auxiliary vehicles. Meat can be purchased more economically and distributed more hygienically with the centralized kitchen convoy than is the case with a large number of small units.

The kitchen installation is carried on one vehicle. Electric heaters are mounted under four double-walled 300litre cooking containers, the space between the inner and outer walls being filled with glycerine to increase the thermal efficiency. Over the rear wheels of the vehicle is a six-compartment electric oven, which can deal with 2,500 rations of meat in 1+ hour. The temperature of the various cooking units

can be separately controlled. At the rear are two electrically heated doublewalled containers, forcoffee or tea.

Five Flettner ventilators are mounted on the roof, which also carries pushbuttons for the attachment of a canvas tent structure, This vehicle operates in conjunction with a trailer incorporating a 2.000litre double-walled container for tea or coffee, having a capacity of 20,000 litres per 24 hours. Five special taps enable rations of litre each to be automatically supplied. The equip ment is completed by a sausage machine, a meat cutter, a butcher's bench and a refrigerator.

Equipment is provided for heating soup, which, when ready, may be transferred to 155 40-litre cans, which are stored in thermic boxes in a special vehicle. The containers in the kitchen can thus be emptied so soon as the cooking operations are completed. A trailer for vegetables and other foodstuffs is coupled to the vehicle carrying the warm soup, the trailer also having accommodation for 1,400 loaves in two boxes.

The convoy include§ a vehicle carrying a 3,000-litre water tank and a 1,000-litre fuel tank. A four-wheeldrive six-wheeler, working in conjunc

tion with a two-wheeled trailer, is used for general haulage in connection with the fleet and can be operated across country.

Other vehicles comprise a six-wheeler incorporating a power station and two radio transmitters, one of 200 watts and the other of 20 watts. This outfit hauls a two-wheeled trailer carrying spare parts. Another vehicle is provided with a complete set of tools and a portable fire pump mounted on a supplementary water container in which the water for the kitchen is heated.

There is also a mobile surgery and operating theatre that can be hermetically closed. At the rear of this vehicle is a waiting room, whilst a trailer incorporates be:ths for injured soldiers and sleeping accommodation for the personnel.

It is anticipated that the convoy will prove to be of great value in providing essential services with a minimum of delay.