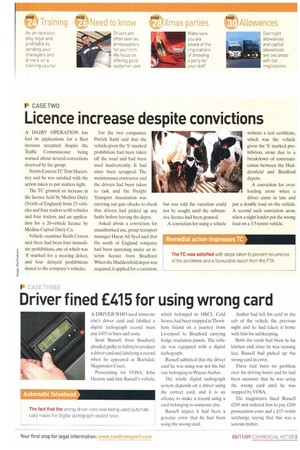 A DRIVER WHO used someone else's driver card and falsified a digital tachograph record must pay £415 in fines and costs.

Scott Russell, from Bradford, pleaded guilty to failing to produce a driver card and falsifying a record when he appeared at Rochdale Magistrates Court.

Prosecuting for VOSA, John Heaton said that Russell's vehicle, which belonged to HBCL Cold Stores, had been stopped at Thornham Island on a journey from Liverpool to Bradford carrying fridge insulation panels. The vehicle was equipped with a digital tachograph.

Russell admitted that the driver card he was using was not his, but one belonging to Wayne Archer.

The whole digital tachograph system depends on a driver using the correct card, and it is an offence to make a record using a card belonging to someone else.

Russell argues it had been a genuine error that he had been using the wrong card. Archer had left his card in the cab of the vehicle the previous night and he had taken it home with him for safekeeping.

Both the cards had been in his kitchen and, since he was running late. Russell had picked up the wrong card in error.

There had been no problem over his driving hours and he had been unaware that he was using the wrong card until he was stopped by VOSA.

The magistrates fined Russell £200 and ordered him to pay £200 prosecution costs and a £15 victim surcharge, saying that this was a serious matter.