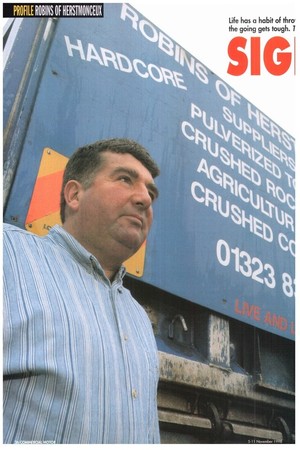 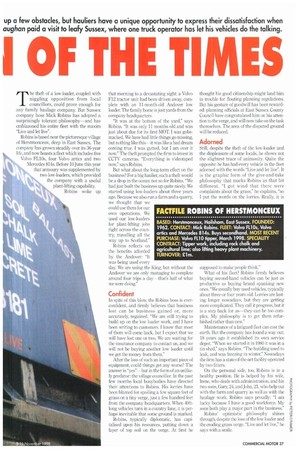 Life has a habit of thra the going gets tough. 7 up a few obstacles, but hauliers have a unique opportunity to express their dissatisfaction when aughan paid a visit to leafy Sussex, where one truck operator has let his vehicles do the talking.

The theft of a low-loader, coupled with niggling opposition from local councillors, could prove enough for any family haulage company. But Sussex company boss Mick Robins has adopted a surprisingly tolerant philosophy—and has emblazoned his entire fleet with the maxim "Live and let live".

Robins is based near the picturesque village of Herstmonceux, deep in East Sussex. The company has grown steadily over its 36-year life, and now boasts a fleet which includes five Volvo FL10s, four Volvo artics and two Mercedes 814s. Before 10 June this year that armoury was supplemented by two low-loaders, which provided the company with a useful plant-lifting capability. Robins woke up that morning to a devastating sight: a Volvo F12 tractor unit had been driven away, complete with an 11-month-old Andover low loader. The family home is just yards from the company headquarters.

"It was at the bottom of the yard." says Robins. "It was only 11 months old and was just about due for its first MOT. I was gobsmacked. We have had little things go missing, but nothing like this---it was like a bad dream coming true. I was gutted, but I am over it now." The theft prompted the firm to invest in CCTV cameras. "Everything is videotaped now," says Robins.

But what about the long-term effect on the business? For a big haulier, such a theft would be a drop in the ocean: not so for Robins. "We had just built the business up quite nicely. We started using low-loaders about three years ago. Because we also run a farm and a quarry, we thought that we could use them for our own operations. We used our low-loaders for plant-lifting jobs right across the country, travelling all the way up to Scotland."

Robins reflects on the benefits afforded by the Andover: "It was being used every day. We are using the King, but without the Andover we are only managing to complete around four trips a day that's half of what we were doing."

In spite of this blow, the Robins boss is everconfident, and firmly believes that business lost can be business gained or, more accurately, regained. "We are still trying to build up on the low loader work, and 1 have been writing to customers. I know that most of them will come back, but I expect that we will have lost one or two, We are waiting for the insurance company to contact us, and we will not be buying another low loader until we gel the money from them."

After the loss of such an important piece of equipment, could things get any worse? The answer is "yes" --hut in the form of an unlikely predator: the village councillor. In the past few months local busybodies have directed their attentions to Robins. His lorries have been blamed for spoiling a few square feet of grass on a tiny verge, just a few hundred feet from the company headquarters. When 40ftlong vehicles turn in a country lane, it is perhaps inevitable that some ground is marked.

Robins, typically diplomatic, has capitalised upon his resources, putting down a layer of top soil on the verge. At first he thought his good citizenship might land him in trouble for flouting planning regulations. But his gesture of goodwill has been rewarded: planning officials at East Sussex County Council have congratulated him on his attention to the verge, and will now take on the task themselves, The area of the disputed ground will be reduced.

Still, despite the theft of the low-loader and the displeasure of some locals, he shows not the slightest trace of animosity. Quite the opposite: he has had every vehicle in the fleet adorned with the words "Live and let live". It is the graphic form of the give-and-take philosophy that marks Robins as that bit different. "I got wind that there were complaints about the grass." he explains, "so I put the words on the lorries. Really, it is supposed to make people think," What of his fleet? Robins firmly believes buying second-hand vehicles can be just as productive as buying brand spanking new ones. "We usually buy used vehicles, typically about three or four years old. Lorries are lasting longer nowadays, but they are getting more complicated. They call it progress, but it is a step back for us—they can be too complex. My philosophy is to get them refurbished rather than new."

Maintenance of a fatigued fleet can cost the earth. But the company has found a way out: 18 years ago it established its own service depot. "When we started it in 1980 it was in a tin shed," says Robins. "The building used to leak, and was freezing in winter." Nowadays the firm has a state-of-the-art facility operated by two fitters.

On the personal side, too, Robins is in a healthy position. He is helped by his wife, Irene, who deals with administration, and his two sons, Gary, 24, and John, 21, who help out with the farm and quarry as well as with the haulage work. Rol) ins says proudly: "I am lucky because I have a good workforce. My sons both play a major part in the business."

Robins' optimistic philosophy shines t hrough, despite the loss of the low loader and t he eroding grass verge. "Live and let live," he says with a smile.