Mercedes twin-axle cattle transporter has been stolen from an abattoir in Lancashire. 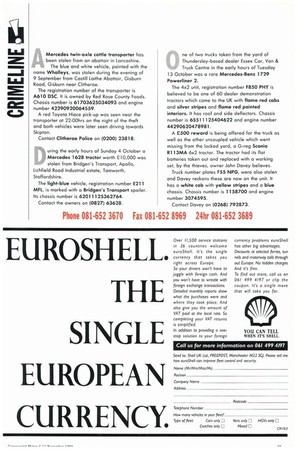 Page 23, 5th November 1992 — Mercedes twin-axle cattle transporter has been stolen from an abattoir in Lancashire.
Close
Noticed an error?
If you've noticed an error in this article please click here to report it so we can fix it.
Keywords : Transport, Land Transport, Road Transport, Truck, Vehicles, Gisburn, Scania Ab, Vans

The blue and white vehicle, painted with the name Whalleys, was stolen during the evening of 9 September from Castill Laithe Abattoir, Gisburn Rood, Gisburn near Clitheroe.

A red Toyota Hiace pick-up was seen near the transporter at 22:00hrs on the night of the theft and both vehicles were later seen driving towards Skipton.

The light-blue vehicle, registration number E211 MFL, is marked with a Bridgen's Transport spoiler. Its chassis number is 62011125362764.

Contact the owners on (0827) 63628. ne of two trucks taken from the yard of Thundersley-based dealer Essex Car, Van & • Truck Centre in the early hours of Tuesday 13 October was a rare Mercedes-Benz 1729 Powerliner 2.

The 4x2 unit, registration number F850 PHY is believed to be one of 60 dealer demonstration tractors which came to the UK with flame red cabs and silver stripes and flame red painted interiors. It has roof and side deflectors. Chassis number is 65511125404622 and engine number 44290620478981.

A £500 reward is being offered for the truck as well as the other uncoupled vehicle which went missing from the locked yard, a G-reg Scania RI 13MA 6x2 tractor, The tractor had its flat batteries taken out and replaced with a working set, by the thieves, owner John Davey believes.

Truck number plates F55 NPG, were also stolen and Davey reckons these are now on the unit. It has a white cab with yellow stripes and a blue chassis. Chassis number is 1158700 and engine number 3074595.