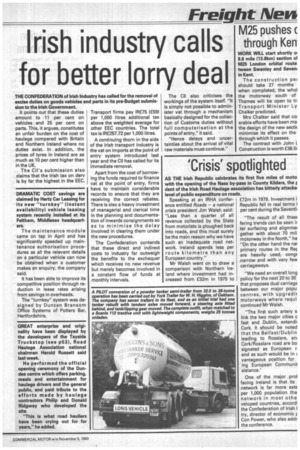 AS THE Irish Republic celcbrates its first five miles of moth' with the opening of the Ness by-pass in County Kildare, the g dent of the Irish Road Haulage association has bitterly attackel level of public expenditure on roads.

Speaking at an IRHA conference entitled Roads — a national crisis president Jim Walsh said: "Less than a quarter of all revenue collected by the State from motorists is ploughed back into roads, and this must surely be the main reason why we have such an inadequate road network. Ireland spends less per route kilometre than any European country."

Mr Walsh went on to draw a comparison with Northern Ireland where investment had increased from £32m in 1975 to E72m in 1979. Investment i Republic fell in real terms I per cent during the Seventh

"The result of all thesE fering trends can be seen ir ter surfacing and alignmei gether with about 70 mil, motorway in the North," he "On the other hand the nal primary routes in the Rer are heavily used, congE narrow and with very few carriageways.

"We need an overall long policy for the next 20 to 30 that proposes dual carriage between our major popu centres, with upgradir motorways where requi continued Mr Walsh.

"The first such artery s link the two major cities c fast and Dublin, extendii Cork. It should be noted that the Belfast/Dublin leading to Rosslare, am Cork/Rosslare road are bo signated as European r and as such would be in vantageous position for ing European Communii sistance.'

One of the major prot facing Ireland is that its network is far more ext€ per 1,000 population tha network in most othe veloped countries, accordi the Confederation of Irish I try, director of economic r Con Power, who also addr the conference.