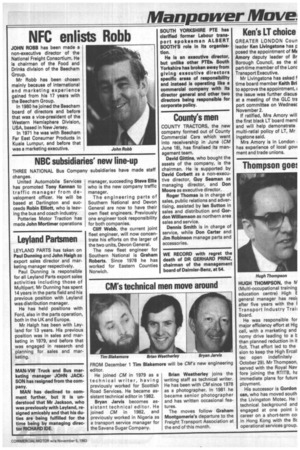 Page 15, 5th November 1983 — CM's technical men move around
Close
Noticed an error?
If you've noticed an error in this article please click here to report it so we can fix it.
Keywords :

FROM December 1 Tim Blakemore will be CM's new engineering editor.

He joined CM in 1979 as a technical writer, having previously worked for Scottish Road Services. He became assistant technical editor in 1982.

Bryan Jarvis becomes assistant technical editor. He joined CM in 1982, and previously worked in Nigeria as a transport service manager for the Savana Sugar Company. Brian Weatherley joins the writing staff as technical writer. He has been with CM since 1978 as a photographer. In 1981 he became senior photographer and has written occasional features.

The moves follow Graham Montgomerie's departure to the Freight Transport Association at the end of this month.