Items of News in a Few Lines 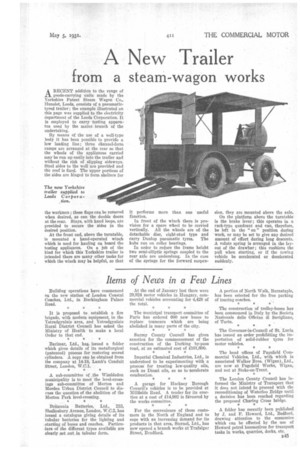 Page 63, 5th May 1931 — Items of News in a Few Lines
Close
Noticed an error?
If you've noticed an error in this article please click here to report it so we can fix it.

It is proposed to establish a fire brigade, with modern equipment, in the Ystradgyulais area, and Ystradgynlais Rural District Council has asked the Ministry of Health to make a local Order to that end.

Barimar, Ltd., has.. issued a folder which gives details of its metallurgical (patented) process for restoring scored cylinders. A copy can be obtained from the company at 14-18, Lamb's Conduit Street, London, W.C.1.

Britannia Batteries, Ltd., 233, Shaftesbury Avenue, London, W.C.2, has issued a catalogue giving details of its tabular batteries for the lighting and ,starting of buses and coaches. Particulars of the different types available are clearly sset out in tabular form. At the end of January last there were 29,924 motor vehicles in Hungary, commercial vehicles accounting for 4,428 of the total.

The municipal transport committee of Paris has ordered 600 new buses to replace tramcars which are being abolished in many parts of the city.

Surrey County Council has given sanction for the commencement of the construction of the Dorking by-pass road, at an estimated cost of £101,600.

Imperial Chemical Industries, Ltd., is understood to be experimenting with a process for treating low-quality oils, such as Diesel oils, so as to .accelerate combustion.

A garage for Hackney Borough Council's vehicles is to be provided at Millfields Road. A tender for its erection at a cost of £14,992 is favoured by the works committee.

For the convenience of those customers in the North of England and to cope with an increasing demand for its products in that area, Sternol, Ltd., has now opened a branch works at Trafalgar Street, Bradford.

A portion of North Walk, Barnstaple, has been selected for the free parking of touring coaches.

The construction of trolley-buses has been commenced in Italy by the Societa Nazionale delle Officine di Savigliano, of Turin.

The Governor-in-Council of St. Lucia has issued an order prohibiting the importation of solid-rubber tyres for motor vehicles.

The head offices of Pagefield Commercial Vehicles, Ltd., with which is associated Walker Bros. (Wigan), Ltd., are now at Pagefield Works, Wigan, and not at Stoke-on-Trent.

The London County Council has informed the Ministry of Transport that it does not intend to proceed with the reconditioning of Waterloo Bridge until a decision has been reached regarding the proposed Charing Cross bridge.

A folder has recently been published by J. and F. Howard, Ltd., Bedford, drawing attention to the economies which can be effected by the use of Howard petrol locomotives for transport tasks in works, quarries, docks, etc.