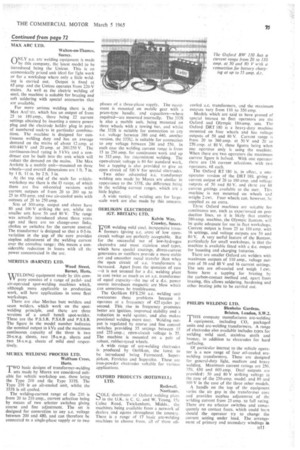 Page 77, 5th March 1965 — OXFORD PRODUCTS (ROTHWELL) LTD.
Close
Noticed an error?
If you've noticed an error in this article please click here to report it so we can fix it.

■ ) in the U.K. is C. G. and W. Young, 15a Caine Road, Twickenham, Middx., the machines being available from a network of dealers and agents throughout the country. There is a range of 17 basic arc-welding machines to choose from, all of them oil cooled a.c. transformers, and the maximum outputs vary from 110 to 350 amp.

Models which-are said to have proved of special interest to fleet operators are the Oxford and Olympic 180-amp, sets. The Oxford DRT 180 is a heavy-duty machine mounted on four wheels and has voltage outputs of 50 and 80 V. Current range is from 20 to 360 amp. at 50 V -and 20 to 270 amp. at 80 V. these figures being when one operator only is using the machine. When there are two operators the maximum current figure is halved. With one operator there are 136 current selections, with two operators, 68 each.

The Oxford RT 180 is, in effect, a oneoperator version of the DRT 180. giving a current output of 20 to 180 amp, and voltage outputs of 50 and 80 V. and there are 68 current ettings available to the user. This machine is not mounted on wheels and weighs 2 cwt. Four wheels can, however, be supplied as an extra.

These Oxford machines arc suitable for continuous use, such as experienced on production lines, so it is likely that another 180-amp. machine, the Olympic Bantam, will be quite adequate for use in fleet workshops. Current output is from 25 to 180 amp. with 16 settings, and voltage outputs are 50 and 80V. A very useful feature of the Bantam, particularly for small workshops, is that the machine is available fitted with a d.c. output for boosting and charging batteries.

There are smaller Oxford are welders with maximum outputs of 110 amp., voltage outputs of 50 and 80 V and 16 current settings. The sets are oil-cooled and weigh 1 cwt. Some have a tapping for brazing by the carbon-contact method and, apart from brazing, this allows soldering, hardening and other heating jobs to be carried out.