Many Licensing Charges at Liverpool 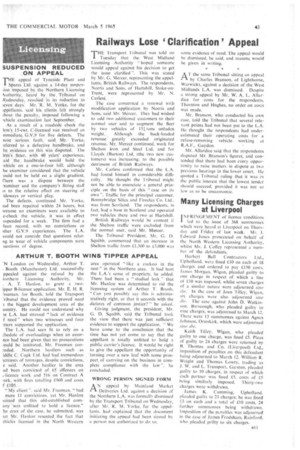 Page 45, 5th March 1965 — Many Licensing Charges at Liverpool
Close
Noticed an error?
If you've noticed an error in this article please click here to report it so we can fix it.
Keywords : Law / Crime

led to the issue of 368 summonses which Were heard at Liverpool on Thursday and Friday of last week. Mr. J. Edward Jones prosecuted on -behalf of the North Western Licensing Authority, whilst Mr. J. Coffey represented a number of the defendants.

Keith Tilley. Wigan, who pleaded. guilty to one charge, was fined E5. Pleas of guilty to 24 charges were returned by B. Thomas and Co. (Liverpool) Ltd., imposition of penalties on this defendant being adjourned to March 12. William -R. Wright and Thomas Lowry, trading as J. W. and L. Transport, Garston. pleaded guilty to 10 charges. in respect of which each partner was fined £5, costs of '0 being similarly imposed. Thirty-two charges were withdrawn. James K. Cumming, Upholland. pleaded guilty to 23 charges; he was fined €3 on each and a total of DO costs, 24 further summonses being withdrawn. Imposition of the penalties was adjourned in the case of lames Frodsham, Rainford, who pleaded guilty to six charges.