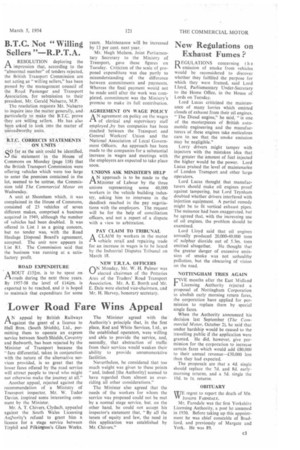 Page 39, 5th March 1954 — B.T.C., CORRECTS STATEMENTS
Close
Noticed an error?
If you've noticed an error in this article please click here to report it so we can fix it.

• 'ON uNtrs , S° far as the unit could be identified, the statement in the House of Commons on Monday (page 118) that the British Transport Commission were offering vehicles which were too large to enter the premises contained in the lot, seemed to be untrue, the Commission told The Commercial Motor on Wednesday.

A unit at Shoreham which, it was complained in the House of Commons, consisted of 23 vehicles of seven different makes, comprised a business acquired in 1949, although the number of vehicles had been doubled. It was offered in List I as a going concern, but no tender was, with the Road Haulage Disposal Board's agreement, accepted. The unit now appears in List RI. The Commission said that the business was running at a satisfactory profit.