Appeal fails as firm is made an example 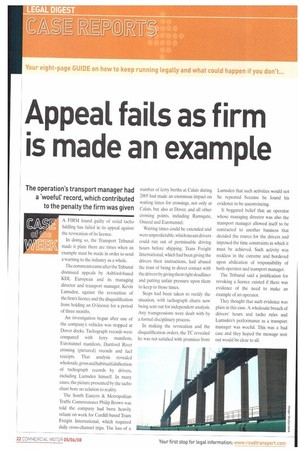 Page 22, 5th June 2008 — Appeal fails as firm is made an example
Close
Noticed an error?
If you've noticed an error in this article please click here to report it so we can fix it.
Keywords : Transport, Land Transport, Traffic Law, Road Safety, Road Transport, Tachograph

The operation's transport manager had a 'woeful' record, which contributed to the penalty the firm was given

A FIRM found guilty of serial tacho fiddling has failed in its appeal against the revocation of its licence.

In doing so, the Transport Tribunal made it plain there are times when an example must be made in order to send a warning to the industry as a whole.

The comments came after the Tribunal dismissed appeals by Ashford-based KDL European and its managing director and transport manager, Kevin Lumsden, against the revocation of the firm's licence and the disqualification from holding an 0-licence for a period of three months.

An investigation began after one of the company's vehicles was stopped at Dover docks. Tachograph records were compared with ferry manifests, Eurotunnel manifests, Dartford River crossing (pictured) records and fuel receipts. That analysis revealed wholesale, gross and habitual falsification of tachograph records by drivers, including Lumsden himself. In many cases, the picture presented by the tacho chart bore no relation to reality.

The South Eastern & Metropolitan Traffic Commissioner Philip Brown was told the company had been heavily reliant on work for Cardiff-based Trans Freight International, which required daily cross-channel trips. The loss of a number of ferry berths at Calais during 2005 had made an enormous impact on waiting times for crossings, not only at Calais, but also at Dover, and all other crossing points, including Ramsgate, Ostend and Eurotunnel.

Waiting times could be extended and were unpredictable, which meant drivers could run out of permissable driving hours before shipping. Trans Freight International, which had been giving the drivers their instructions, had abused the trust of being in direct contact with the drivers by giving them tight deadlines and putting unfair pressure upon them to keep to those times.

Steps had been taken to rectify the situation, with tachograph charts now being sent out for independent analysis. Any transgressions were dealt with by a formal disciplinary process.

In making the revocation and the disqualification orders, the TC revealed he was not satisfied with promises from Lumsden that such activities would not be repeated because he found his evidence to be unconvincing.

It beggared belief that an operator whose managing director was also the transport manager allowed itself to be contracted to another business that decided the routes for the drivers and imposed the time constraints in which it must be achieved. Such activity was reckless in the extreme and bordered upon abdication of responsibility of both operator and transport manager.

The Tribunal said a justification for revoking a licence existed if there was evidence of the need to make an example of an operator.

They thought that such evidence was plain in this case. A wholesale breach of drivers' hours and tacho rules and Lumsden's performance as a transport manager was woeful. This was a bad case and they hoped the message sent out would be clear to all.