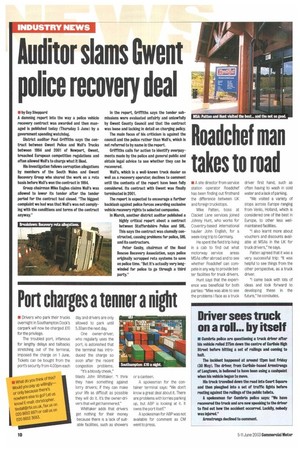 Page 10, 5th June 2003 — Auditor slams Gwent police recovery deal
Close
Noticed an error?
If you've noticed an error in this article please click here to report it so we can fix it.
Keywords : Counties Of Wales, Counties Of The United Kingdom, Gwent, Monmouthshire, Torfaen, Vehicle Recovery

Ira by Guy Sheppard A damning report into the way a police vehicle recovery contract was awarded and then managed is published today (Thursday 5 June) by a government spending watchdog.

District auditor Paul Griffiths says the contract between Gwent Police and Wall's Trucks between 1994 and 2001 of Newport, Gwent, breached European competition regulations and often allowed Wall's to charge what It liked.

His investigation follows corruption allegations by members of the South Wales and Gwent Recovery Group who shared the work on a rota basis before Wall's won the contract in 1994.

Group chairman Mike Eagles claims Wall's was allowed to lower its tender after the tender period for the contract had closed. "The biggest complaint we had was that Wall's was net complying with the conditions and terms of the contract anyway."

In the report, Griffiths says the tender submissions were evaluated unfairly and unlawfully by Gwent County Council and that the contract was loose and lacking in detail on charging policy.

The main focus of his criticism is against the council and the police rather than Wars, which is not referred to by name In the report.

Griffiths calls for action to Identify overpayments made by the police and general public and obtain legal advice to see whether they can be recovered.

Wall's, which is a well-known truck dealer as well as a recovery operator; declines to comment until the contents of the report have been fully considered. its contract with Gwent was finally terminated in 2001.

The report is expected to encourage a further backlash against police forces awarding exclusive vehicle recovery rights to selected companies.

In March, another district auditor published a highly critical report about a contract between Staffordshire Police and Sill. This says the contract was clumsily constructed, causing problems for police, SHL and its contractors.

Peter Cosby, chairman of the Road Rescue Recovery Association, says police originally scrapped rota systems to save on police time. "But it's actually very longwinded for police to go through a third party."