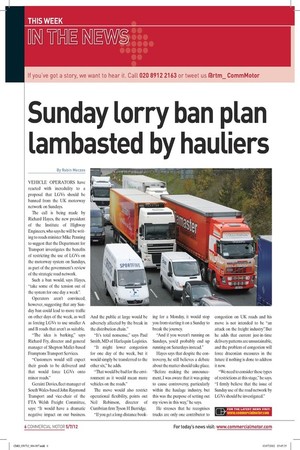 Page 4, 5th July 2012 — Sunday lorry ban plan lambasted by hauliers
Close
Noticed an error?
If you've noticed an error in this article please click here to report it so we can fix it.

VEHICLE OPERATORS have reacted with incredulity to a proposal that LGVs should be banned from the UK motorway network on Sundays.

The call is being made by Richard Hayes, the new president of the Institute of Highway Engineers, who says he will be writing to roads minister Mike Penning to suggest that the Department for Transport investigates the benefits of restricting the use of LGVs on the motorway system on Sundays, as part of the government’s review of the strategic road network.

Such a ban would, says Hayes, “take some of the tension out of the system for one day a week”.

Operators aren’t convinced, however, suggesting that any Sunday ban could lead to more traffic on other days of the week, as well as forcing LGVs to use smaller A and B roads that aren’t as suitable.

“Customers would still expect their goods to be delivered and that would force LGVs onto minor roads.” Geraint Davies, fleet manager of South Wales-based John Raymond Transport and vice-chair of the FTA Welsh Freight Committee, says: “It would have a dramatic negative impact on our business. And the public at large would be adversely affected by the break in the distribution chain.” “It’s total nonsense,” says Paul Smith, MD of Harlequin Logistics.

“It might lower congestion for one day of the week, but it would simply be transferred to the other six,” he adds.

“That would be bad for the environment as it would mean more vehicles on the roads.” The move would also restrict operational flexibility, points out Neil Robinson, director of Cumbrian firm Tyson H Burridge.

“If you get a long-distance book ing for a Monday, it would stop you from starting it on a Sunday to break the journey.

“And if you weren’t running on Sundays, you’d probably end up running on Saturdays instead.” Hayes says that despite the controversy, he still believes a debate about the matter should take place. “Before making the announcement, I was aware that it was going to cause controversy, particularly within the haulage industry, but this was the purpose of setting out my views in this way,” he says.

He stresses that he recognises trucks are only one contributor to congestion on UK roads and his move is not intended to be “an attack on the freight industry”. But he adds that current just-in-time delivery patterns are unsustainable, and the problem of congestion will force draconian measures in the future if nothing is done to address it now.

“We need to consider these types of restrictions at this stage,” he says. “I firmly believe that the issue of Sunday use of the road network by LGVs should be investigated.”