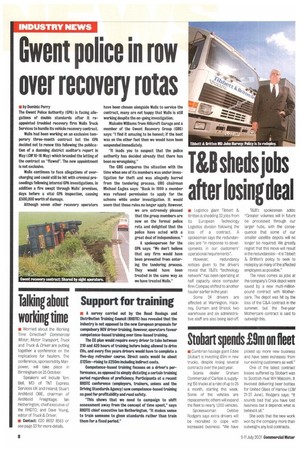 Walls had been working on an exclusive temporary three-month contract but the CPA decided net to renew this following the publication of a damning district auditor's report in May (CR10-16 May) which branded the letting of the contract as 'flawed". The new appointment is net exclusive.

Walls continues to face allegations of overcharging and could still be hit with criminal proceedings following internal CPA investigations. In addition a fire swept through Walls' premises, days before a vital CPA inspection, causing £500,000 worth of damage.

Although seven ether recovery operators have been chosen alongside Walls to service the contract, many are not happy that Walls is still working despite the on-going investigation.

Malcolm Williams from Hil[croft Garage and a member of the Gwent Recovery Group (CRC) says: "I find it amazing to be honest; if the boot was on the other feet then we would have been suspended immediately.

"It leads you to suspect that the police authority has decided already that there has been no wrongdoing."

The CRC compares the situation with the time when one of its members was under Investigation for theft and was allegedly barred from the tendering process. CRC chairman Michael Eagles says: "Back in 1999 a member was refused permission to apply for the scheme while under investigation. It would seem that those rules no longer apply. However, we are extremely pleased that the group members are now on the formal Police rota and delighted that the police have acted with a great deal of independence."

A spokesperson for the CPA says: "We don't believe that any firm would have been prevented from entering the tendering process. They would have been treated in the same way as we have treated Walls."