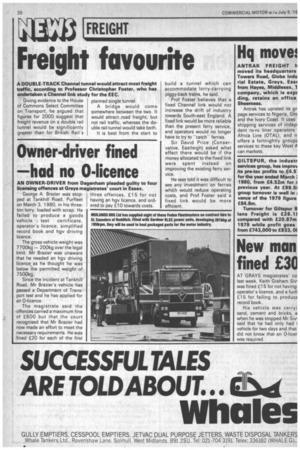 A DOUBLE-TRACK Channel tunnel would attract most freight traffic, according to Professor Christopher Foster, who has undertaken a Channel link study for the EEC.

Giving evidence to the House of Commons Select Committee on Transport, he argued that figures for 2000 suggest that • freight revenue on a double rail tunnel would be significantly greater than for British Rail's planned single tunnel.

A bridge would come somewhere between the two. It would attract road freight, but not rail traffic, whereas the double rail tunnel would take both.

It is best from the start to build a tunnel which can accommodate lorry-carrying piggy-back trains, he said.

Prof Foster believes that a fixed Channel link would not increase the drift of industry towards South-east England. A fixed link would be more reliable than the present ferry service, and operators would no longer have to try to "catch'' ferries.

Sir David Price (Conservative, Eastleigh) asked what effect there would be if the money allocated to the fixed link were spent instead on improving the existing ferry service.

He was told it was difficult to see any investment on ferries which would reduce operating costs, and Prof Foster said a fixed link would be more efficient.