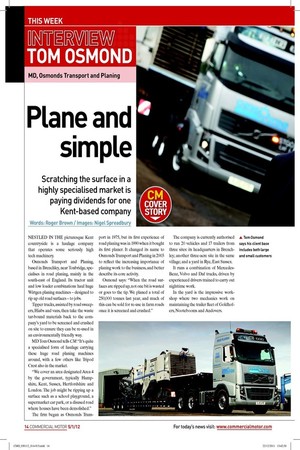 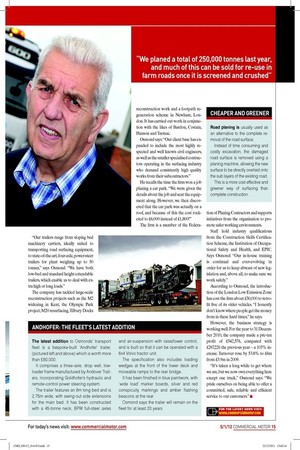 NESTLED IN THE picturesque Kent countryside is a haulage company that operates some seriously high tech machinery.

Osmonds Transport and Planing, based in Brenchley, near Tonbridge, specialises in road planing, mainly in the south-east of England. Its tractor unit and low loader combinations haul huge Wirtgen planing machines – designed to rip up old road surfaces – to jobs.

Tipper trucks, assisted by road sweepers, Hiabs and vans, then take the waste tar-bound materials back to the company’s yard to be screened and crushed on site to ensure they can be re-used in an environmentally friendly way.

MD Tom Osmond tells CM: “It’s quite a specialised form of haulage carrying these huge road planing machines around, with a few others like Tripod Crest also in the market.

“We cover an area designated Area 4 by the government, typically Hampshire, Kent, Sussex, Hertfordshire and London. The job might be ripping up a surface such as a school playground, a supermarket car park, or a disused road where houses have been demolished.”

The irm began as Osmonds Trans

port in 1975, but its irst experience of road planing was in 1990 when it bought its irst planer. It changed its name to Osmonds Transport and Planing in 2003 to relect the increasing importance of planing work to the business, and better describe its core activity.

Osmond says: “When the road surfaces are ripped up, not one bit is wasted or goes to the tip. We planed a total of 250,000 tonnes last year, and much of this can be sold for re-use in farm roads once it is screened and crushed.” The company is currently authorised to run 20 vehicles and 17 trailers from three sites: its headquarters in Brenchley; another three-acre site in the same village; and a yard in Rye, East Sussex.

It runs a combination of MercedesBenz, Volvo and Daf trucks, driven by experienced drivers trained to carry out nighttime work.

In the yard is the impressive workshop where two mechanics work on maintaining the trailer leet of Goldhofers, Nootebooms and Andovers. “Our trailers range from sloping bed machinery carriers, ideally suited to transporting road surfacing equipment, to state-of-the-art, four-axle, power-steer trailers for plant weighing up to 50 tonnes,” says Osmond. “We have both low-bed and standard height extendable trailers, which enable us to deal with extra high or long loads.” The company has tackled large-scale reconstruction projects such as the M2 widening in Kent, the Olympic Park project, M20 resurfacing, Tilbury Docks reconstruction work and a footpath regeneration scheme in Newham, London. It has carried out work in conjunction with the likes of Bardon, Costain, Hanson and Tarmac.

Osmond says: “Our client base has expanded to include the most highly respected and well known civil engineers, as well as the smaller specialised contractors operating in the surfacing industry who demand consistently high quality works from their subcontractors.” He recalls the time the irm won a job planing a car park. “We were given the details about the job and sent the equipment along. However, we then discovered that the car park was actually on a roof, and because of this the cost rocketed to £6,000 instead of £1,800!” The irm is a member of the Federa tion of Planing Contractors and supports initiatives from the organisation to promote safer working environments.

Staff hold industry qualiications from the Construction Skills Certiication Scheme, the Institution of Occupational Safety and Health, and EPIC. Says Osmond: “Our in-house training is continual and ever-evolving in order for us to keep abreast of new legislation and, above all, to make sure we work safely.” According to Osmond, the introduction of the London Low Emission Zone has cost the irm about £30,000 to retroit ive of its older vehicles. “I honestly don’t know where people get the money from in these hard times,” he says.

“It’s taken a long while to get where we are, but we now own everything here except one truck,” Osmond says. “We pride ourselves on being able to offer a committed, safe, reliable and eficient service to our customers.” ■

The latest addition to Osmonds’ transport fleet is a bespoke-built ‘Andhofer’ trailer, (pictured left and above) which is worth more than £80,000.

The trailer features an 8m long bed and is 2.75m wide, with swing-out side extensions for the main bed. It has been constructed with a 45-tonne neck, BPW full-steer axles and air-suspension with raise/lower control, and is built so that it can be operated with a 6x4 Volvo tractor unit.

The specification also includes loading wedges at the front of the lower deck and moveable ramps to the rear bridge.

It has been finished in blue paintwork, with ‘wide load’ marker boards, silver and red conspicuity markings and amber flashing beacons at the rear.

Osmond says the trailer will remain on the fleet for at least 20 years.

Road planing is usually used as an alternative to the complete removal of the road surface.

Instead of time consuming and costly excavation, the damaged road surface is removed using a planing machine, allowing the new surface to be directly overlaid onto the sub layers of the existing road.

This is a more cost effective and greener way of surfacing than complete construction.