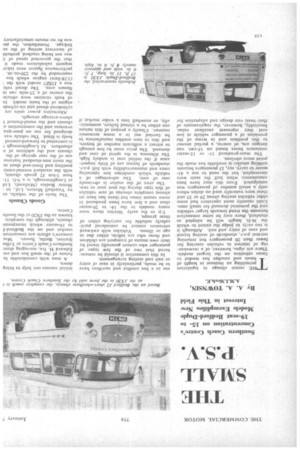 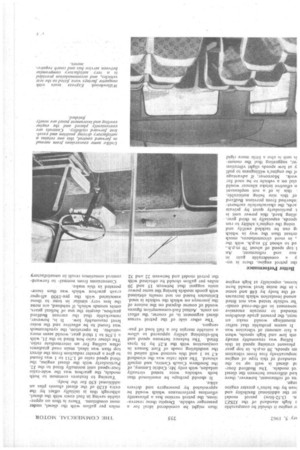 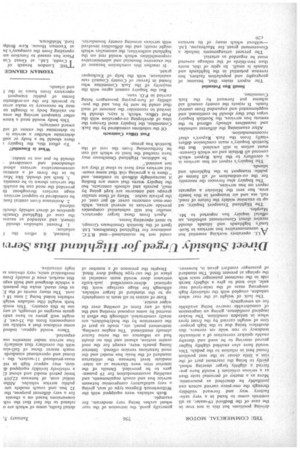 Southern Coach Centre's Concentration on 15to 19-seat Bedford-Duple Models Exemplifies New Interest in This Field By A. A. TOWNSIN,

THE recent change in legislation permitting an increase in length of buses and coaches has tended to focus attention on the largest models. There are signs, however, of a reawakening of interest in vehicles catering for fewer than 20 passengers but retaining normal p.s.v.. standards of seating layout • arid ease of entry and exit. Although it is too early to judge the extent to which the 36-ft. length will be adopted as standard, there may be some connection between the trend towards larger vehicles and the potential demand for small ones. Until recently most operators had some older vehicles seating about 29 or 33 and these were naturally used on duties where only a small number of passengers was anticipated. Even this may have been uneconomic when half the seats were unoccupied, but the need to use a 41seater to carry, say, 15 passengers because nothing sinaller is available has made the point more obvious.

The mass-produced 11or 12-seater miniature buses based on 15-cwt. van designs are, of course, a partial answer to this problem and in terms of the provision of a passenger vehicle at low cost they represent excellent value. Inevitably, however, the requirements of their .basic van design and adaptation for use as a bus conflict and sacrifices have to be made, particularly in ease of entry or exit and seating arrangement.

In this connection it should be remembered that two of the few types of passenger who cannot generally travel by their own means of transport are children and those who are infirm, either due to

age or illness. Vehicles with awkward entrances cannot be considered parti.cuiarly suitable for carrying either of these groups.

Up to the early 'thirties there were many models in the 14to 20-seater class and a few have been produced in more recent times but there has been an almost complete absence of new vehicles of this type during the past year or two.

The crux of the matter is obviously one of cost. The advantages of a vehicle which combines low operating costs and manreuvrability with full p.s.v. standards of layout are of little importance if the initial cost is unduly high. The dilemma is the spiral of cost and demand. The price must be low enough to attract a sufficient number of buyers, and this in turn enables manufacture to be tarried out in a more economic manner. Clearly a project of this nature can either be a virtual failure, economically, or snowball into a wider 'market if

initial success can help to bring down.

A man with considerable fa future of the small bus and coo Edward H. lye, managing direc Southern Coach Centre at Tel ha Station, Battle, Sussex. Muc concern's efforts are concentrati market and on the Bedford-I to 19-seater which incorporah chassis, although the complete known as the 1X20 at the Southi Centre.

The basis of the vehicle, as by Vauxhall Motors, Ltd., to I Motor Bodies (Midland), Ltd at Loughborough, is a 9-ft. 11base 3-ton 12 goods chassis, with the standard normal-contr position and front-end sheet in the main non-standard features use of the rear springs of the chassis and the addition of r■ absorbers. At Loughborough t is converted to forward-control body is fitted. The vehicle was designed for use on poor-qua overseas and the construction o: chassis and the metal-framed t above-average strength.

Alternative power units are cylindered diesel and six-cylinde engine of the basic model. In of both versions were obtaim the course of a 25-mile run in Sussex area. The diesel vehi was a J2SZ7 model with the (3.28-litre) engine which has superseded by the 220-cu.-in. • performance figures were taker sequent calculations made it that the governed speed of ti was not being reached, probabi of incorrect setting of the ac linkage. Nonetheless, the pei was by no means unsatisfactory engine it should be comparable high standard of the J2SZ2 n. (3.52-litre) petrol model or the additional flexibility and iven by the latter's greater engine Inge.

ins of refinement, however, there ked difference between the diesel -el models. The Bedford four diesel is well up to the standard of this type of engine nmparatively free from vibration im speeds, 30 m.p.h. in top scar pleasant cruising speed in this Idling was reasonably steady oth low and high speeds, when a fair amount of vibration was It seems probable that softer mountings would make an nent, the present grade doubtless ntended to restrain excessive novement in off-the-road condilie vehicle tested was not fitted sound insulation which increases of the body by £48 and some 1 in the noise level would have !come, especially at high engine

the petrol engine, there is uny a considerable gain in .nce and refinement. An top speed of about 70 m.p.h., ed to about 55 m.p.h. with the , in most circumstances, much ortant than the way in which ig can be tackled swiftly and using the engine's ability to run speeds, especially in third gear. Aling hard, this power unit is t particularly quiet by private ards, the characteristic carburetinherited from previous Bedford of this size being noticeable. . this is of a not unpleasant n effective intake silencer would cial on a vehicle to be used for york. Moreover, if advantage )f the engine's willingness to pull y at low speeds slight vibration trit, suggesting that the mountis unit is also a little more rigid than might be considered ideal for a passenger vehicle. Despite these reservations, the petrol version has a pleasantly effortless performance which would be appreciated by passengers and drivers alike.

It should perhaps be mentioned that both vehicles were tested virtually unladen, with only Mr. Cedric Lemmy, of the Southern Coach Centre, and myself aboard. The axle ratio was the standard 4.7 to 1 and this seemed well suited to the undulating roads of East Sussex in conjunction with the 8.25 by 16 tyres fitted. The balance between speed and hill-climbing ability appeared to allow a suitable margin for a full load of passengers.

The other side of the petrol versus diesel argument is, of course, the effect on costs. Actual fuel-consumption figures would of course depend on the nature of the journeys on which the vehicle is used. Estimates based on test results obtained with goods models having the same power units suggest that between 15 and 20 miles per gallon should be obtained with the petrol model and between 22 and 32 miles per gallon with the diesel, under most conditions. There is thus an appreciable saving in fuel costs with the diesel, although this is initially offset by the extra £120 of the diesel chassis plus an additional £50 for the body.

Turning to features common to both models, the gearbox was the wide-ratio four-speed unit normally fitted to the J2. Particularly with the diesel engine, the third speed ratio of 1.711 to 1 was found to give a greater reduction from the direct top than was ideal, main road gradients often calling for an intermediate ratio. The closer ratio box fitted to the Jl, with a 1.576 to 1 third gear, would seem more suitable. In operation, the synchromesh was found to be effective and the noise

level reasonably low. It is, however, remarkable that the current Bedford gearbox, despite the use of helical gears, emits sounds which, if subdued, arc none the less very similar in tone to those associated with the pre-1950 all-spur crash gearbox which was then incorporated in this make.

driving positions but this is not true in the case of the Bedford 19-seater, as all controls come to hand in a very satisfactory way and forward visibility through the one-piece curved screen can justifiably be described as panoramic. More as a matter of personal taste than as a serious criticism I would haie preferred a slightly, larger steering wheel, partly to bring the rearmost part of the rim a little closer to the seat position found best in relation to the pedals. This would have also enabled slightly higher geared steering to be used and thereby enable quicker correction of a noticeable tendency' to run wide on. corners, this doubtless being due to the high proportion of weight carried by the front tyres when in unladen condition. The brakes inspired confidence, giving an impression of considerable reserve being available for an emergency._

The lack of weight at the rear when unladen, coupled with the relatively high unsprung mass of the twin-tyred rear axle, also tend to Ole a slightly harsh ride in the rearmost passenger seats with the springs at present fitted. The standard of passenger comfort given is, however. generally good, the intrusion of the rear wheel arches being very moderate, for example.

Both vehicles were equipped with the Willowbrook Express type of seat, giving a very satisfactory compromise between service bus and coach requirements, and enabling accommodation for 19 passengers to be provided. Details of the interior trim were likewise at an intermediate level between the utilitarian standard of the basic bus model and the most luxurious version offered. Interior lining panels were, except for the roof centre section, absent and this no doubt had an influence on the noise factor already mentioned. The engine cowling. instrument pane, etc., made as part of the conversion by the bodybuilders, are neatly constructed, although the effect is marred by some exposed riveting and the lack of any form of cowling over the wiper motor.

Ease of access to all seats is completely up to the standard of larger vehicles, although for stage carriage work the optional driver-controlled jack-knife 'entrance door would seem essential in place of the car-type hinged door fitted.

Despite the presence of a number of detail faults, some of which are o related to the fact that the veh Conversions based on a chassis for a very different purpose, the J2 bus and coach models are public service vehicles. Altho initial cost, of between £2,019 basic petrol model and about E: a relatively lavishly equipped di sion, may appear high in rel. mass-produced 11-seaters, the c tional and operational standards much nearer those of full-size with the corollary that similarly free service under intensive use expected.

There would appear, indeed some evidence that a vehicle usi components from the 35-cwt. J.: might well prove to have entir quate margins of strength, at any use in this country. This wouli both weight (the unladen weigh vehicles tested being 2 tons 18 c cost. The many merits of the .1:; as they stand, make the potenti: a vehicle designed and built expr this market, even if mainly from mechanical units, very obvious ai ingly attractive.