Ticket" Fines to Start in London 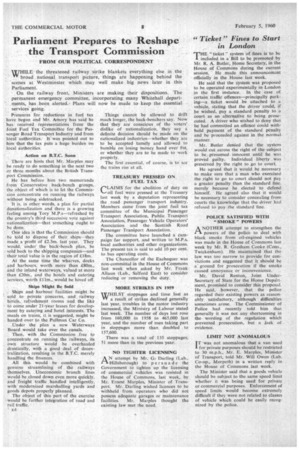 THE"ticket" system of fines is to be included in a Bill to be promoted by Mr. R. A. Butler, Home Secretary, in the House of Commons during the current session. He made this announcement officially in the House last week.

He said that the system was proposed to be operated experimentally in London in the first instance. In the case of certain traffic offences—principally parking—a ticket would be attached to a vehicle, stating that the driver could, if he wished, pay a standard penalty to a court as an alternative to being prosecuted. A driver who wished to deny that he had committed an offence could withhold payment of the standard penalty and be proceeded against in the normal

Mr. Butler denied that the system would cut across the right of the subject to be/presumed innocent until he was proved guilty. Individual liberty was preserved by the right to go to court.

A NOTHER attempt to strengthen the powers of the police to deal with black smoke from oil-engined vehicles was made in the House of Commons last week by Mr. R. Gresham Cooke (Cons., Twickenham). He maintained that the law was too narrow to provide for con: victions and suggested that it should be aground for prosecution if the smoke caused annoyance or inconvenience. . Mr. David Renton, Joint UnderSecretary of State for the Home Depa'rtment, promised to consider this proposal. He said, however, . that the police regarded their existing powers as reasonably satisfactory, although difficulties sometimes arose. The Commissioner of Police had recently told him that generally it was not any shortcoming in the wording of the regulation which prevented prosecution, but a lack of evidence.

I T was not anomalous that a van used for private purposes should be restricted to 30 m.p.h., Mr. E. Marples, Minister of Transport, told Mr. Will Owen (Lab. Co-op., Morpeth) in a written reply in the House of Commons last week.

The Minister said that a goods vehicle should be subject to the same speed limit whether it was being used for private or commercial purposes. Enforcement of speed limits would become extremely difficult if they were not related to classes of vehicle which could be easily recognized by the police.