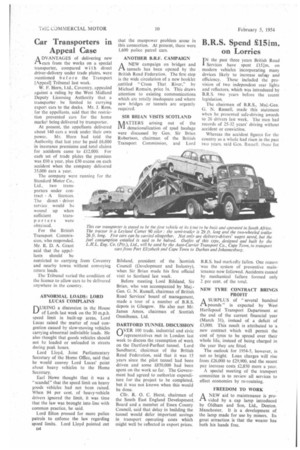 of Lords last week on the 30 m.p.h. speed limit in built-up areas, Lord Lucas raised the matter of road congestion caused by slow-moving vehicles carrying abnormal indivisible loads. He also thought that goods vehicles should not be loaded or unloaded in streets during peak hours.

Lord Lloyd, Joint Parliamentary Secretary of the Home Office, said that he would convey Lord Lucas' point about heavy vehicles to the Home Secretary.

Earl Howe thought that it was a "scandal" that the speed limit on heavy goods vehicles had not been raised. When 94 per cent, of heavy-vehicle drivers ignored the limit, it was time that the law was brought into•line with common practice, he said.

Lord Elton pressed for more police patrols to enforce the law regarding speed limits. Lord Lloyd pointed out D4 that the manpower problem arose in this connection. At present, there were 1,600 police patrol cars.