Scottish Tractor Trials in a Blizzard 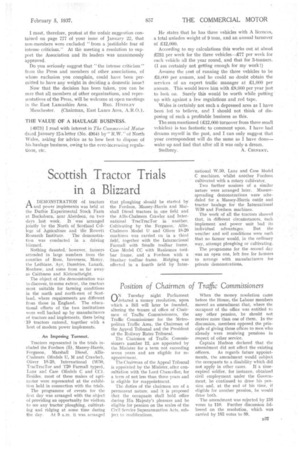 Page 51, 5th February 1937 — Scottish Tractor Trials in a Blizzard
Close
Noticed an error?
If you've noticed an error in this article please click here to report it so we can fix it.
Keywords : Tractors, Fordson Tractor, Massey Ferguson, Allis-chalmers, Massey Harris Model 101

ADEMONSTRATION .of. tractors and power implements was held at the Duthie Experimental Stock Farm at Bucksburn,'.near Aberdeen: on 'two 'days. last week. It ' was arranged

• jointly by the North of _Scotland Col. lege Of Agriculture and tlie: Rowett Reseal-eh Institute. • The demonstration was conducted in a driving blizzard. • • Nothing daunted, however,. farmers attended in large numbers from the counties of •RosS, Irrverness, Moray, the Lothians, 'Ayr, Dumfries, Lanark, Renfrew, and some from as far away as Caithness and Kirkcudbright.

The object of the demonstration was to discover, to some extent, the tractors most suitable for farming conditions in the north and north-east of Scotland, -where requirements are different from those in England. The educational efforts of the two institutions were welt backed up by manufacturers of tractors and implements, there being 19 tractors entered,, together with a host of modern power implements.

Tractors represented in the trials inchided the Fordson (5), Massey-Harris, Ferguson, Marshall Diesel, AllisChalmers (Models tJ, M and Crawler), Oliver 18-20, International (W30, TracTracTor and T20 Farmall types), Lanz and Case (Models C and CC). Besides, most of these makes of agrimotor were represented at the exhibition held in connection with the trials.

The programme of events for the first day was arranged with the object of providing an opportunity for visitors to see any tractor ploughing, cultivating and ridging at some time during

that ploughing should be started by the Fordson. Massey-Harris and Marshall Diesel .tractors in one field and the Allis-Chalmers Crawler and International TracTracTor in . another. Cultivating by the -Ferguson,Allis-Chalmers Modeland Oliver 18-20 machines was -carried on in a third field; together with the International Farman withSmalls -toolbar frame, Case Model CC with Rariscuries tool-bar frame, and • a Fordson with a .Stanhay toolbarframe. -Ridging was effected in a fourth field by Inter

national W.30, Lanz and Case Model C machines, whilst another Fordson cultivated with a rotary cultivator, Two further sessiens of a similar nature were arranged later. Manurespreading demonstrations were scheduled for a Massey-Harris outfit and tractor haulage for the International W30 and Fordson machines:

The work of all the :tractors showed that, in different circumstances, each implement 'and power unit had its individual advantages. But the weather and soil conditions were such

that no farmer would, in the Ordinary . .

The programme for the second day .was, an open one, left free for farmers to arrange with manufacturers for private demonstrations.