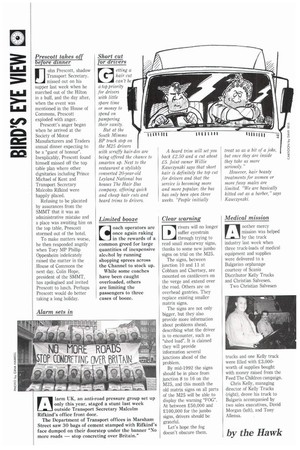 last week when he marched out of the Hilton in a huff, and the day after, when the event was mentioned in the House of Commons, Prescott exploded with anger.

Prescott's anger began when he arrived at the Society of Motor Manufacturers and Traders annual dinner expecting to be a "guest of honour", Inexplicably, Prescott found himself missed off the top table plan where other dignitaries including Prince Michael of Kent and Transport Secretary Malcolm Rifkind were happily placed.

Refusing to be placated by assurances from the SMMT that it was an administrative mistake and a place was awaiting him on the top table, Prescott stormed out of the hotel.

To make matters worse, he then responded angrily when Tory MP Phillip Oppenheim indelicately raised the matter in the .House of Commons the next day. Colin Hope, president of the SMMT, has apologised and invited Prescott to lunch. Perhaps Prescott would do better taking a long holiday. etting a hair cut can't be a top priority for drivers with little spare time or money to spend on pampering their vanity.

But at the South Mimms BP truck stop on the M25 drivers with scruffy hair-dos are being offered the chance to smarten up. Next to the restaurant a stylishly converted 20-year-old Leyland National bus houses The Hair Bus company, offering quick and cheap hair cuts and beard trims to drivers.

CLimited booze oach operators are 13: cgiagaine w a raking 1Ofg a common greed for large quantities of inexpensive alcohol by running shopping sprees across the Channel to stock up.

While some coaches have been caught overloaded, others are limiting the passengers to three cases of booze. A beard trim will set you back £2.50 and a cut about £5. Joint owner Willie Kawczynzki says that short hair is definitely the top cut for drivers and that the service is becoming more and more popular; the bus has only been open three weeks. "People initially

rivers will no longer suffer eyestrain through trying to read small motorway signs, thanks to some new jumbo signs on trial on the M25.

The signs, between junction 10 and 11 at Cobham and Chertsey, are mounted on cantilevers on the verge and extend over the road. Others are on overhead gantries. They replace existing smaller matrix signs.

The signs are not only bigger, but they also provide more information about problems ahead, describing what the driver is to encounter, such as "shed load". It is claimed they will provide information several junctions ahead of the problem.

Let's hope the fog doesn't obscure them. treat us as a bit of a joke, but once they are inside they take us more seriously."

However, hair beauty treatments for women or more fussy males are limited. "We are basically kitted out as a barber," says Kawczynzki.

mission was helped by the truck industry last week when three truck-loads of medical equipment and supplies were delivered to a Bulgarian orphanage courtesy of Scania Distributor Kelly Trucks and Christian Salvesen.

Two Christian Salvesen trucks and one Kelly truck were filled with £3,000worth of supplies bought with money raised from the Feed The Children campaign.