Price of Petrol in London and New York. 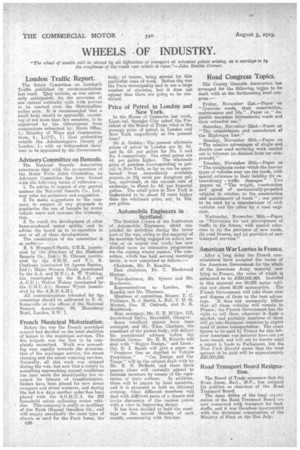 Page 4, 5th August 1919 — Price of Petrol in London and New York.
Close
Noticed an error?
If you've noticed an error in this article please click here to report it so we can fix it.
Keywords : Pricing, Petroleum Products, Business, Commodities Market, Gasoline And Diesel Usage And Pricing, Gasoline, Price, Marketing, Goods, Business / Finance

In the House of Commons last week, Lieut.-col. Spender Clay asked the President of the Board of Trade what is. the average price of petrol in London and New York respectively at. the present time Sir A. Geddes : The present wholesale prices of petrol in London are 2s. 8d. and 2s. 6d. per gallon for No. 1 and No. 3 respectively. The retail prices are 4d. per gallon higher. The wholesale price of gasolene (corresponding to petrol) in New York, as far as can be ascertained from immediately available sources,ais 241 cents per Anaericaft gal'ion, equivalent, at the current rate of exchange, to about is. 4d. per Imperial gallon. The retail price in New York is understood to be about 12 cents higher than the wholesale price, say, 1s. 10d. per gallon.