The valuable work of maintenance committees 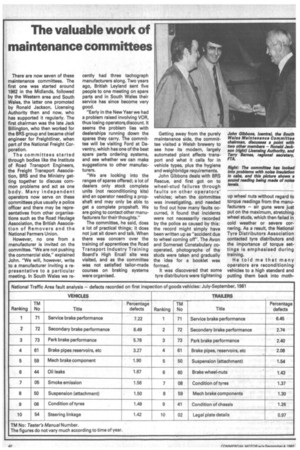 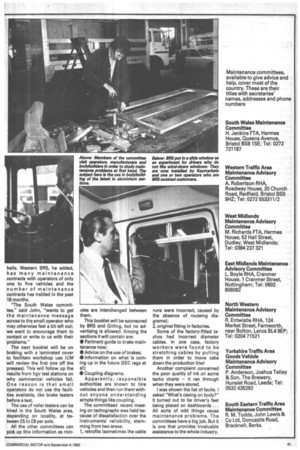 There are now seven of these maintenance committees. The first one was started around 1962 in the Midlands, followed by the Western area and South Wales, the latter one promoted by Ronald Jackson, Licensing Authority then and now, who has supported it regularly. The first chairman was the late Jack Billington, who then worked for the BRS group and became chief engineer for Freightliner, when part of the National Freight Corporation.

The committees started through bodies like the Institute of Road Transport Engineers, the Freight Transport Association, BRS and the Ministry getting together to discuss common problems and act as one body. Many independent operators now serve on these committees plus usually a police officer and there may be representatives from other organisations such as the Road Haulage Association, the British Association of Removers and the National Farmers Union.

However, no one from a manufacturer is invited on the committee. "We are not pushing the commercial side," explained John. "We will, however, write to a manufacturer inviting a representative to a particular meeting. In South Wales we re cently had three tachograph manufacturers along. Two years ago, British Leyland sent five people to one meeting on spare parts and in South Wales their service has since become very good.

"Early in the New Year we had a problem raised involving VOR, thus losing operators, discount. It seems the problem lies with dealerships running down the spares they carry. The committee will be visiting Ford at Daventry, which has one of the best spare parts ordering systems, and see whether we can make suggestions to other manufacturers.

"We are looking into the ranges of spares offered; a lot of dealers only stock complete units not reconditioning kits) and an operator needing a propshaft end may only be able to get a complete propshaft. We are going to contact other manufacturers for their thoughts."

The committee, he said, does a lot of practical things; it does not just sit down and talk. When there was concern over the training of apprentices the Road Transport Industry Training Board's High Ercall site was visited, and as the committee was not satisfied tailor-made courses on braking systems were organised. Getting away from the purely maintenance side, the committee visited a Welsh brewery to see how its modern, largely automated plant affects 'transport and what it calls for in vehicle types, plus the hygiene and weighbridge requirements.

John Gibbons deals with BRS Rescue, and first got on to wheel-stud failures through faults on other operators' vehicles; when the committee was investigating, and needed to find out how many faults occurred, it found that incidents were not necessarily recorded by the police as caused by this: the record might simply have been written up as "accident due to wheel coming off". The Avon and Somerset Constabulary cooperated, photographs of the studs were taken and gradually the idea for a booklet was formed.

It was discovered that some tyre distributors were tightening up wheel nuts without regard to torque readings from the manufacturers — air guns were just put on the maximum, stretching wheel studs, which then failed in cold weather or severe cornering. As a result, the National Tyre Distributors Association contacted tyre distributors and the importance of torque settings is emphasised during training.

"The South Wales committee," said John, "wants to get the maintenance message across to the small operator who may otherwise feel a bit left out; we want to encourage them to contact or write to us with their problems."

The next booklet will be on braking with a laminated cover to facilitate workshop use (CM will review the first one off the presses). This will follow up the results from hgv test stations on why commercial vehicles fail. One reason is that small operators do not use the facilities available, like brake testers before a test.

The use of roller testers can be hired in the South Wales area, depending on locality, at between £5 to £131 per axle.

All the other committees can pick up this information as min utes are interchanged between them.

This booklet will be sponsored by BRS and Girling, but no advertising is allowed. Among the sections it will contain are: • Pertinent guide to brake maintenance now; • Advice on the use of brakes; • Information on what is coming up in the future (EEC regs et al); • Coupling diagrams.

Apparently, responsible authorities are known to hire vehicles and then run them without anyone understanding simple things like coupling.

The committees' recent meeting on tachographs was held because of dissatisfaction over the instruments' reliability, stemming from two areas: 1, retrofits (sometimes the cable runs were incorrect, caused by the absence of routeing diagrams); 2, original fitting in factories.

Some of the factory-fitted tachos had incorrect diameter cables. In one case, factory workers were found to be stretching cables by pulling them in order to move cabs down the production line!

Another complaint concerned the poor quality of ink on some tacho charts — it ran through when they were stored.

was shown the list of faults. I asked "What's casing on body?" It turned out to be driver's feet being placed on dashboards ... All sorts of odd things cause maintenance problems. The committees have a big job. But it is one that provides invaluable assistance to the whole industry.