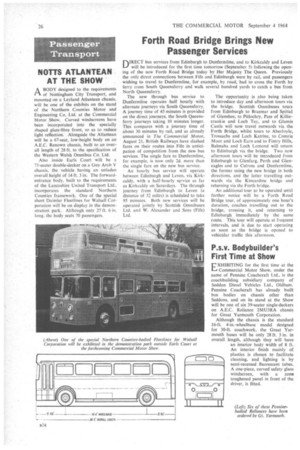 Page 28, 4th September 1964 — Forth Road Bridge Brings New Passenger Services
Close
Noticed an error?
If you've noticed an error in this article please click here to report it so we can fix it.

DIRECT bus services from Edinburgh to Dunfermline, and to Kirkcaldy and Leven will be introduced for the first time tomorrow (September 5) following the opening of the new Forth Road Bridge today by Her Majesty The Queen. Previously the only direct connections between Fife and Edinburgh were by rail, and passengers wishing to travel to Dunfermline, for example, by road, had to cross the Forth by ferry from South Queensferry and walk several hundred yards to catch a bus from North Queensferry.

The new through bus service to Dunfermline operates half hourly with alternate journeys via South Queensferry, A journey time of 45 minutes is provided on the direct journeys. the South Queensferry journeys taking 10 minutes longer. This compares with a journey time of about 10 minutes by rail, and as already announced in The Commercial Motor, August 21, British Railways have slashed fares on their routes into Fife in anticipation of competition from the new bus services. The single fare to Dunfermline, for example, is now only 2d. more than the single fare on the new bus service.

• An hourly bus service will operate between Edinburgh and Leven, via Kirkcaldy, with a half-hourly service as far as Kirkcaldy on Saturdays. The through journey from Edinburgh to Leven (a distance of 32 miles) is scheduled to lake 95 minutes. Both new services will be operated jointly by Scottish Omnibuses Ltd. and W. Alexander and Sons (Fife) Ltd. The opportunity is also being taken to introduce day and afternoon tours via the bridge. Scottish Omnibuses tours from Edinburgh to Braemar and Spittal of Glenshee, to Pitlochry, Pass of Kittlecrankie and Loch Tay, and to Glamis Castle will now travel outwards via the Forth Bridge, whilst tours to Aberfoyle, Trossachs and Loch Katrine, to Comrie Moor and Loch Earn and to Fintry Hills, Balmaha and Loch Lomond will return to Edinburgh via the bridge. Two new afternoon tours will be introduced from Edinburgh to Glenfarg, Perth and Gleneagles and to Culross and Dunfermline, the former using the new bridge in both directions, and the latter travelling outwards via the Kincardine bridge and returning via the Forth bridge.

An additional tour to be operated until further notice will he a Forth Road Bridge tour, of approximately one hour's duration, coaches travelling out to the bridge, crossing it, and returning to Edinburgh immediately by the same route. This tour will operate at frequent intervals, and is due to start operating as soon as the bridge is opened to vehicular traffic this afternoon.