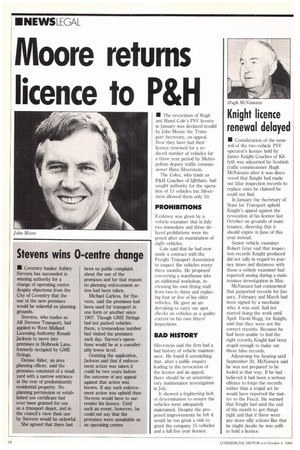 Page 20, 4th October 1986 — Moore returns
Close
Noticed an error?
If you've noticed an error in this article please click here to report it so we can fix it.
Keywords : Silverstein, Business / Finance, Environment

• The revocation of Hugh and Hazel Cole's PSV licence in January was declared invalid by John Moore the Transport Secretary, on appeal. Now they have had their licence renewed for a reduced number of vehicles for a three year period by Metropolitan deputy traffic commissioner Hans Silverstein.

The Coles, who trade as P&H Coaches of Ightham, had sought authority for the operation of 15 vehicles but Silverstein allowed them only 10.