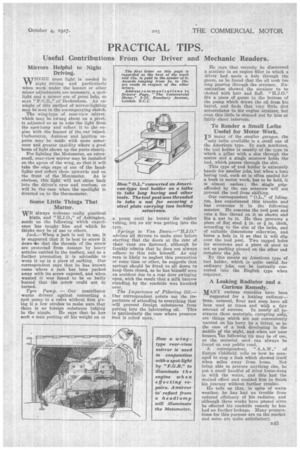 Page 63, 4th October 1927 — PRACTICAL TIPS.
Close
Noticed an error?
If you've noticed an error in this article please click here to report it so we can fix it.

Useful Contributions From Our Driver and Mechanic Readers.

Mirrors Helpful to Night Driving. WHERE more light is needed in night driving and particularly when work under the bonnet or other minor adjustments are necessary, a spotlight and a mirror are of great help, so says " FAITS.," of Beckenham. Au ex

ample of this method of mirror-lighting may be seen in the accompanying sketch.

The wing-type of rear-view mirror, which may be swung about on a pivot, is adjusted so as to take the light from the spot-lamp and reflect it to the engine with the bonnet of the car raised. Carburetter, Autovac and ignition repairs may be made with more assurance and greater rapidity where a good beam of light shows up the parts clearly.

For lighting the Motometer, an extrasmall, rear-view mirror may be installed on the apron of the wing, so that it will take the edge rays of one of the headlights and reflect them upwards and on the front of the Motometer. As is obvious, this light will not shine back into the driver's eyes and confuse, as will be the case when the spotlight is directed on to the thermometer.

Some Little Things That Matter.

WE always welcome really practical hints, and "H.J.0.," of Ashington, sends us the following which experience has taught• him and which he thinks may be of use to others.

Jack.—When a jack is not in use, it is suggested that it is best to screw it down So that the threads of the screw are protected from damage by heavy articles carried in the toolbox, and as a further precaution it is advisable to wrap it up in a piece of sacking. Our correspondent says that be has known cases where a jack has been packed away with its screw exposed, and when wanted it was found to be so badly burred that the screw could not be turned.

Tyre Pump. — Our contributor warns drivers against connecting a tyris pump to a valve without first giving it a few strokes to make sure that there is no foreign substance lodging in the nipple. He says that he has sees a man putting all his weight on to

a pump until he bands the rubber tubing, but no air was getting into the tyre.

Springs to Van Doors.—"H.J.0." advises all drivers to make sure before starting that the doors at the rear of their vans are fastened, although he frankly admits that he does not always adhere to this rule himself. As any man is likely to neglect this precaution at some time or other, he suggests that springs should be fitted to all doors to keep them closed, as he has himself seen an accident due to a rear door swinging open, with the result that a milk barrow standing by the roadside was knocked over.

The Importance of Filtering Oil.— Our correspondent points out the importance of attending to everything that will prevent foreign substances from

getting into the lubricating oil. This is particularly the case where pressure feed is relied upon. He says that recently he discovered a strainer in an engine filler in which a driver had made a hole through the gauze, as he found that the oil took too long passing through the strainer. Ex. amination showed the strainer to be choked with hair and fluff. "

fits a piece of gauze in the bottom of the pump which drawn the oil from his barrel, and finds that very little dirt accumulates in his engine strainer, but even this little is cleaned out by him at fairly short intervals.

To Render a Small Lathe Useful for Motor Work.

IN many of the smaller garages, the only lathe available is a small one of the American type. In such machines, the tool holder is usually of the type in which a pillar with a slot through the centre and a single setscrew holds the tool, which passes through the slot.

This type of tool holder is extremely handy for smaller jobs, but when a long boring tool, such as is often needed for a bush in motor work, has to be held, it is almost useless ; the single gripafforded by the one setscrew will not prevent the tool from shifting.

Our correspondent " 0.L.," of Islington, has experienced this trouble and has overcome it in the following manner. He removes the tool post and cuts a fine thread on it as shown and fits a nut to it. He then procures a piece of fiat steel in. or in. thick, according to the size of the lathe, and of suitable dimensions otherwise, and bores a hole in it so that it will slip over the tool post. Two tapped holes for setscrews and a piece of steel to act as packing pinned on the other end complete the job.

By this means an American type of tool holder, which is quite useful for ordinary jobs, can be instantly converted into the English type when required.

A Leaking Radiator and a Curious Remedy. MANY curious remedies have been suggested for a leaking radiator—' bran, oatmeal, flour and soap have all been used at times and -with a fair amount of success. In nearly all instances these materials, excepting soap, are things which are not conveniently carried on his lorry by a driver, so in the case of a leak developing in the middle 2f the night, andwhen not near houses, the following tip may be of use, as the material used can always be found on any public road.

A correspondent, " A.A.W.," of Sutton Goldfield, tells us how he managed to stop a leak which showed itself when miles away from home. Not being able to procure anything else, he Put a small handful of dried horse-dung in with the water, and this had the desired effect and enabled him to finish his journey without further trouble.

He tells us that, in spite of warm weather, he has had no trouble from reduced efficiency of his radiator, and although three weeks have passed since he effected his roadside remedy he has Lad no further leakage. Many preparations for this purpose are on the market and some are quite satisfactory.